The setup of your guitar (pt 3): How to adjust your guitar action based on the kind of bridge

In this article you will find instructions and tips about action adjustment of electric and acoustic guitars. It is a set of operations that includes the neck truss-rod adjustment, described on the Soundsation blog in the articles What is the truss-rod? and Let's adjust the truss-rod.

Before continuing you must have:

All that verified, we can now talk about how to adjust the action by yourself acting on the bridge and its saddles.

What is the action?

Action is a piano derived word by which is substantially intended the way a guitar player feels the strings under his fingers on the fretboard. The main reference for this more or less comfortable feeling is the distance between strings and fret tops. It is a fundamental measure for enjoying a comfortably playing instrument without compromising the sound, but its adjustment includes at least two operations, that must be done after the strings have been installed on the guitar.

Acoustic guitars, both metal or nylon stringed, are equipped with a fixed non-adjustable bridge (with rare exception), on which it is possible to operate only by physically removing a section until the desired height is obtained.

Kinds of bridges and saddles

The most popular bridges are:

Let’s see them one by one.

We can define this kind of bridge as a simplified version of the set consisting of a Tune-o-matic style bridge and a fixed tailpiece (with studs or a trapeze). The wrap-around acts as a bridge and a tailpiece at the same time and can be machined to pre-compensate string intonation. It is one of the earliest and simplest bridges made. Only its general height can be adjusted acting on side studs. The bridge curve with respect to the curvature radius of the fretboard is pre-set. Some modern models feature separate saddles that are horizontally adjustable for intonation. 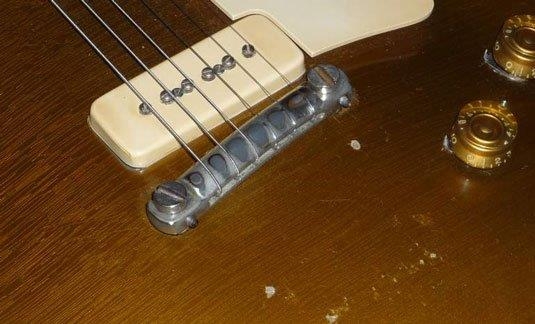 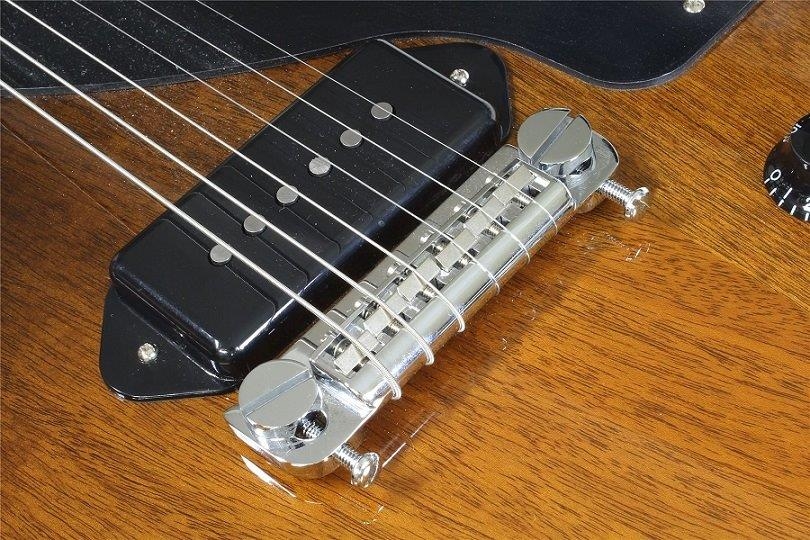 Whether it is the ABR-1 Tune-O-Matic (the one with a wire to avoid saddle vibrations) or the successive Nashville and its versions, from now on we will shortly write TOM. Saddle curvature radius is non-adjustable and pre-set to follow the fretboard one (usually 12”). We can only make one adjustment on a TOM bridge: lowering or raising it acting on side studs. Some models provide the convenient adjustment lock through tightening. 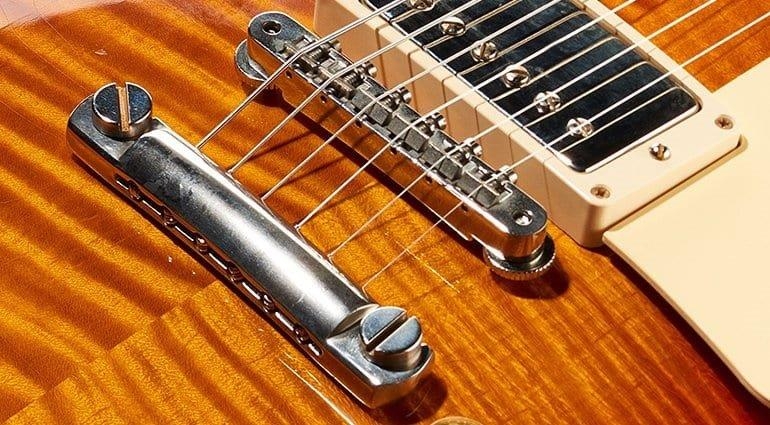 Saddles can be only horizontally shifted to set intonation; this is a topic we talk about in a dedicated article on the Soundsation blog. A good luthier can also act on a single saddle to adjust the height of a single string; but this is a real master's operation. 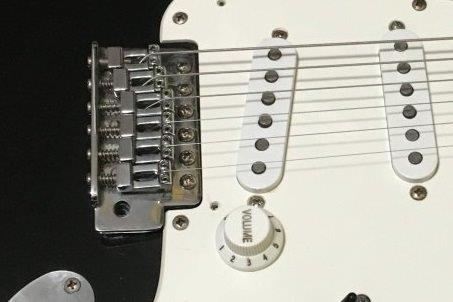 There are a lot of version of this vibrato bridge (often incorrectly defined tremolo); to be clear, the one with a bar, also including those floating models with two mounting studs as the Floyd Rose or Wilkinson style (in the picture) and others, with or without a locking nut or locking tuners. 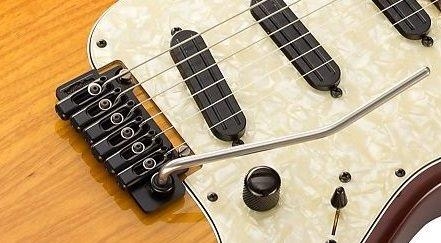 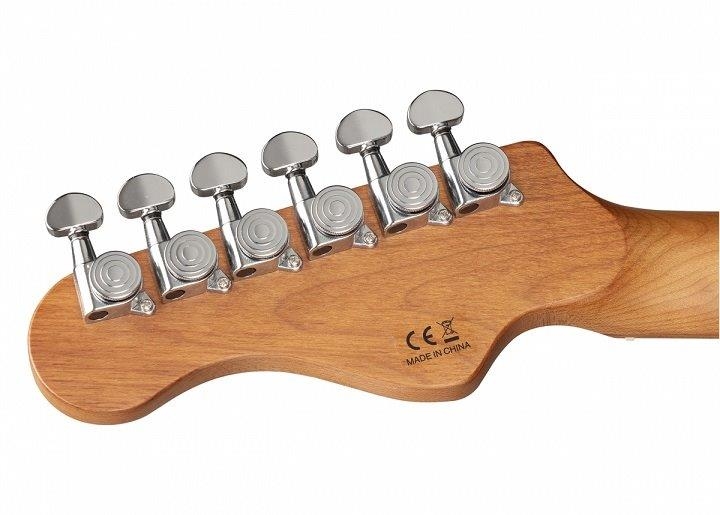 Every vibrato bridge gives you the possibility of adjusting the saddles both horizontally, for intonation, and vertically, for string height over the fretboard.

Before adjusting the saddle height, it is necessary to set the overall height of the bridge plate, that tilts on two or six screws (less often four) that are inserted in the guitar body.

The good news is that in six screw vintage inspired vibrato bridges, the base is practically fixed, while it is possible to tilt the angle with respect to the body top and get different vibrato performances. So, height adjustment has to be done on every single saddle, thanks to two Allen head threaded elements.

In most modern bridges, such as those with a blade plate that swings on two studs (G&L, Wilkinson, Fender American Standard, Floyd Rose [in the picture]), we can adjust the general height to some extent, lowering or raising the studs. If you have to work on two fronts, the plate and the saddles, the adjustment is more advanced and requires an experienced professional intervention. 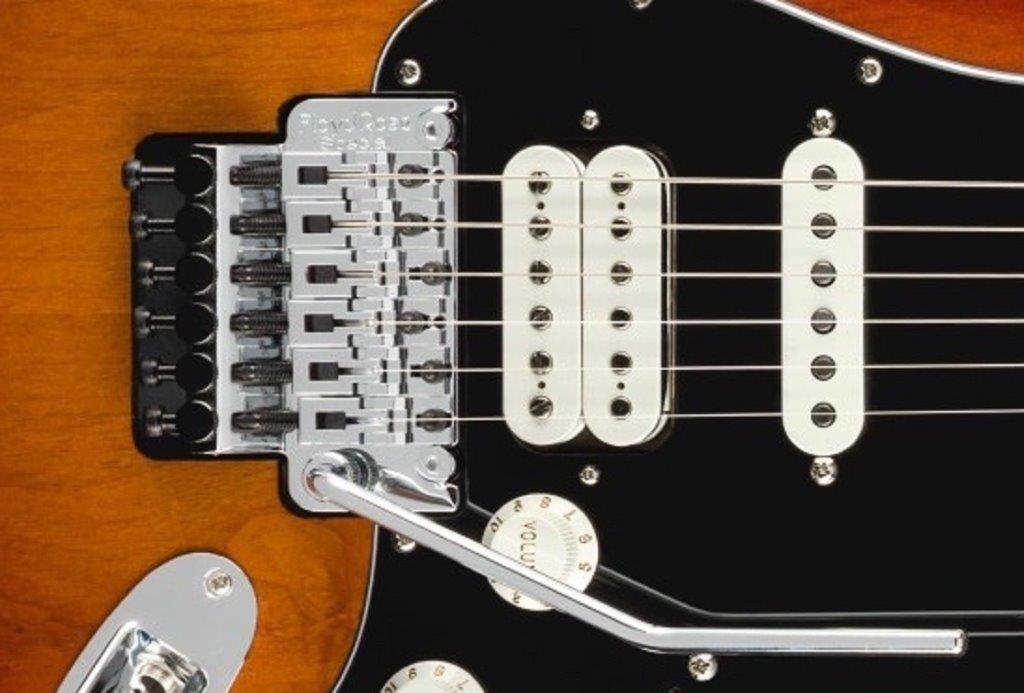 A rare kind of bridge is the roller or needle bearing vibrato, also a single saddle height adjustment case.

The complete setting of a vibrato bridge is the topic of another article on the Soundsation blog. Here we take for granted that your guitar vibrato is already set according to your taste.

The Bigsby vibrato does not need any height adjustment, since it actually is a tailpiece, always matched with a TOM bridge. 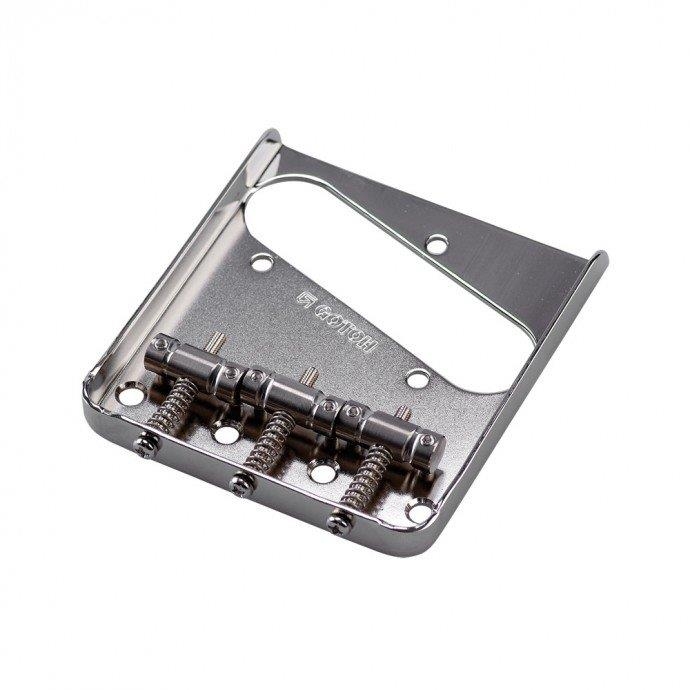 This vintage school fixed bridge is flat mounted on the guitar top and features three saddles, each one serving a couple of strings; so strings height has to be adjusted by pairs by means of an Allen wrench, more rarely of a flat screwdriver.

Most modern bridges have six separate saddles and is then possible to adjust any single string height, such as described about vibrato bridges. 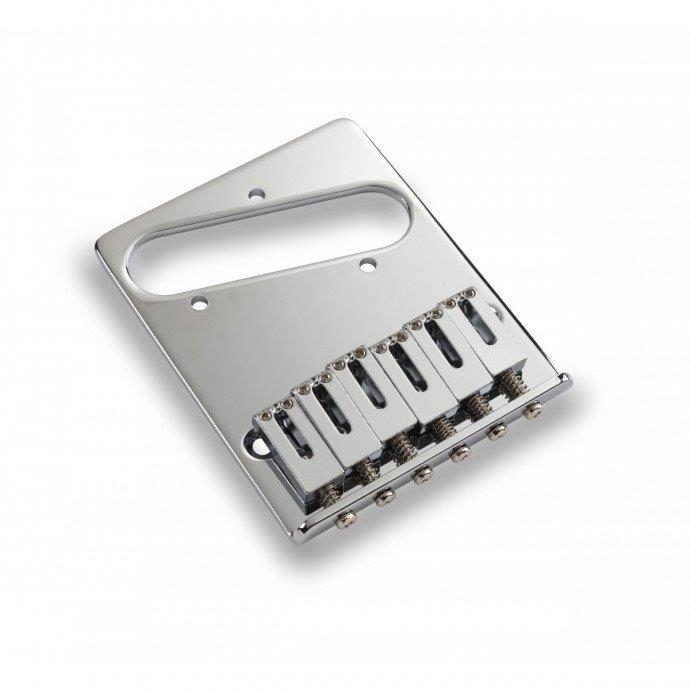 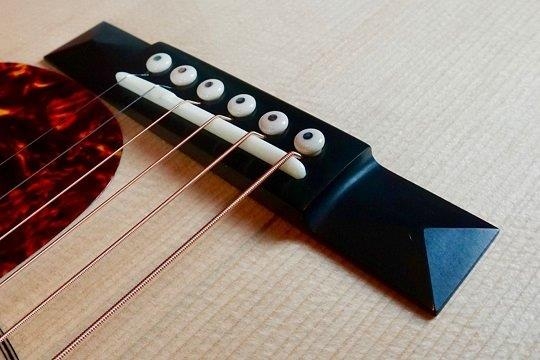 In this case there is not much to be adjusted because the bridge is made from a single bone or suitable plastic piece, and includes eventual intonation pre-setting. If you need to lower the action it is necessary to cut or file the bone base until the desired height is obtained. If you have to raise the action, you'd better change the bridge with a higher one.

There are single string pre-set replacements for classical guitars, that are aimed at improving the general action.

Anyway, working on acoustic guitars is mainly a luthier's and professional repairman's job, mostly when the instrument is pre-amplified and there is a piezo electric pickup under the bridge; and unless you use solutions as the KNA SG-1 o NG-2 portable piezos!

And now, how are you going to adjust the action?

Sorry to disappoint you, but as far as action specs we are in a field of great variability. Here are a few proven examples of measured action from the underside of the first and sixth strings to the 12th fret top: 1 millimetre for Carlos Santana and Jeff Beck; 2 millimetres for Stevie Ray Vaughan; 3 millimetres for B.B. King.

By example, Fender and Gibson refer for electric guitars to a 1 millimetre relief (we found this word in the articles What is the truss-rod? and Let's adjust the truss-rod), still measured at the 12th fret. These specifications can be improved by a luthier, who can get even half the value!

Back to the real world, equip yourself with a caliper or some shims: if you find on your guitar a distance of 1 millimetre between lower E and the 12th fret, consider yourself lucky and enjoy your instrument. 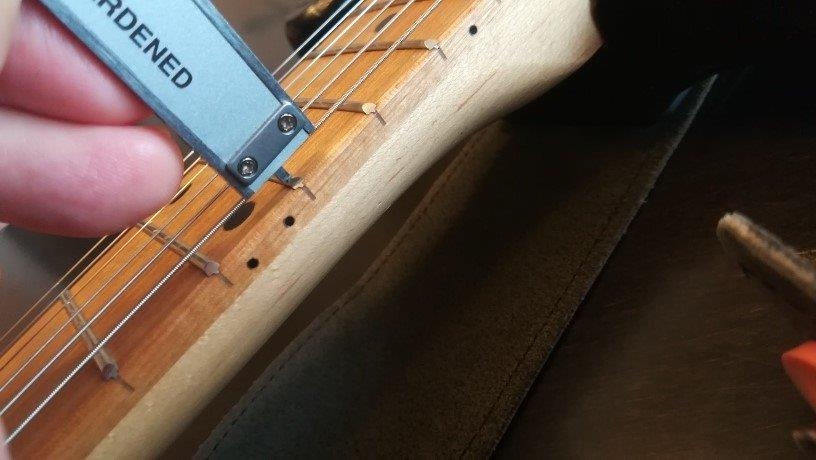 Instead, if you have adjusted the neck straightness and you want a great action according to your taste, you will need to work with patience on the bridge studs and saddles. It would be good if the studs were completely screwed into their holes, but you can raise them a little if needed; simply turn their slot head with a screwdriver. 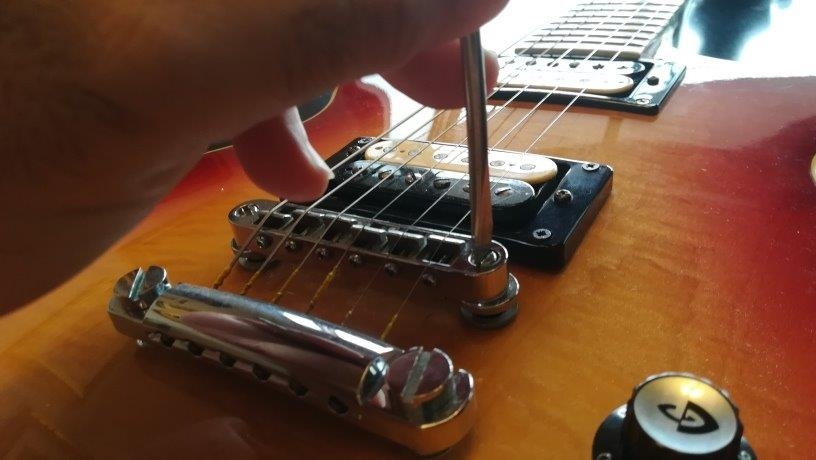 The adjustment can be hard if the instrument is in tune, so it is useful to loosen the strings before acting on the threaded washers that make the TOM move vertically. The market offers devices (as the one showed in the photo) that facilitate washer rotation; but they must have a correct step. 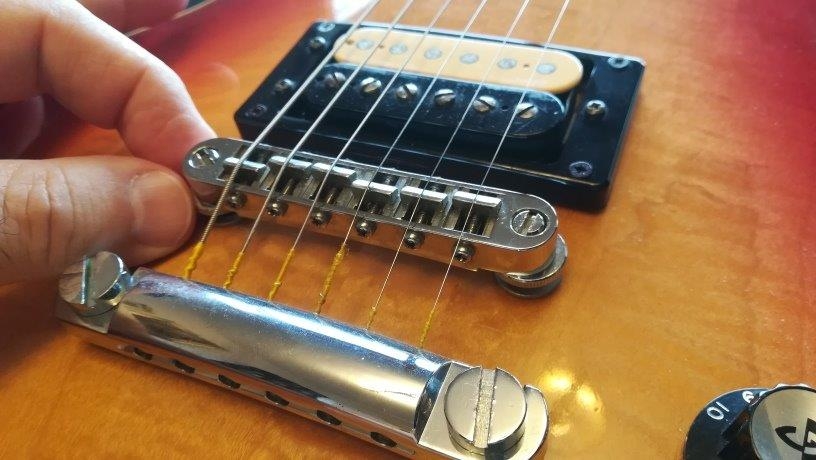 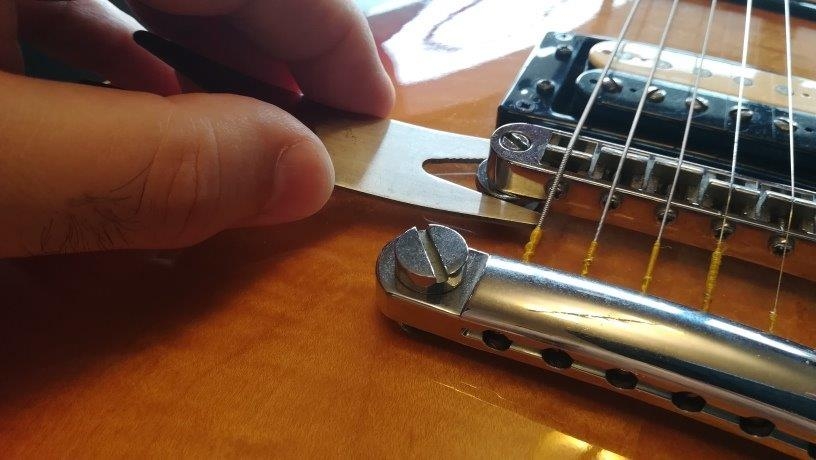 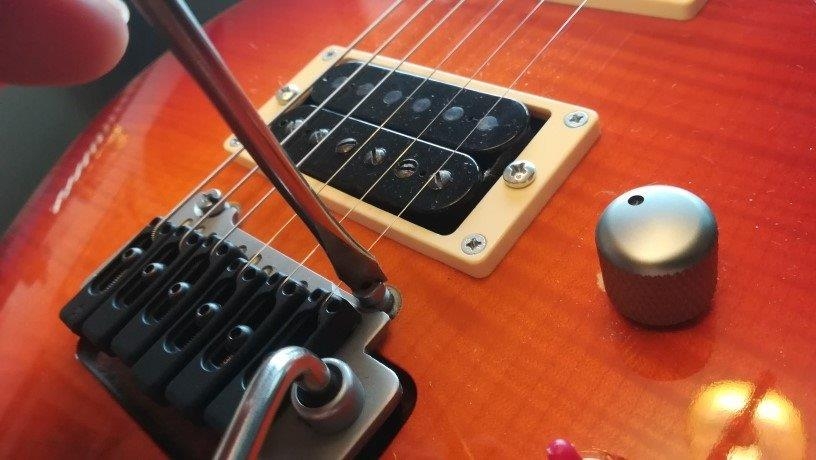 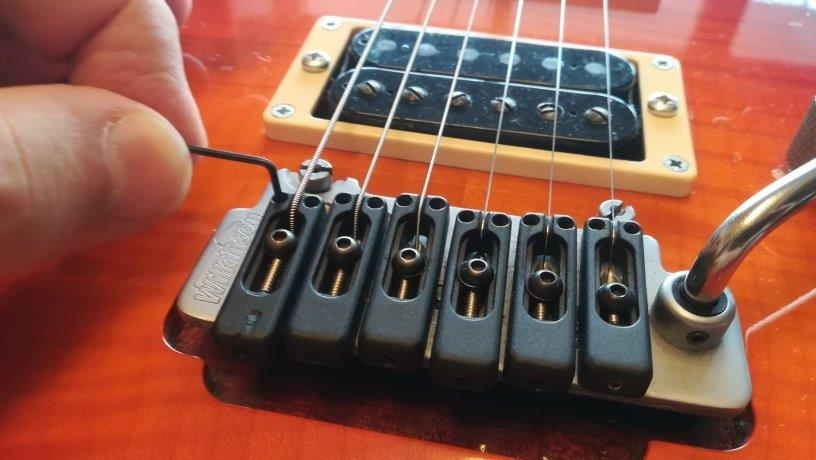 Guitar fretboards can have different curvature radiuses, from the faithfully vintage and noticeably curved 7” ½ to the popular 9” ½, from 12” to 14” and over, towards an almost flat pattern suitable for fretboard racers. There also are compound curvature radiuses, in which the fretboard becomes flatter going closer to the instrument body, thus making easier barre chords and comping through the first portion of the neck, and bending and solos through the second one.

As we said, wrap-around and TOM bridges feature a factory pre-set curvature that traces the fretboard of the instrument on which they are installed.

The situation is different for bridges with individually adjustable saddles, in which it is necessary to arrange them and follow the fretboard radius.

Start placing the saddles of the two outermost strings at the desired height, then go on with the other strings in order to get a curve with D and G strings at the centre top. It is important to know your fretboard radius and rely on your eyes and experience. Also use gauges and the measuring tools that can be found on the market. 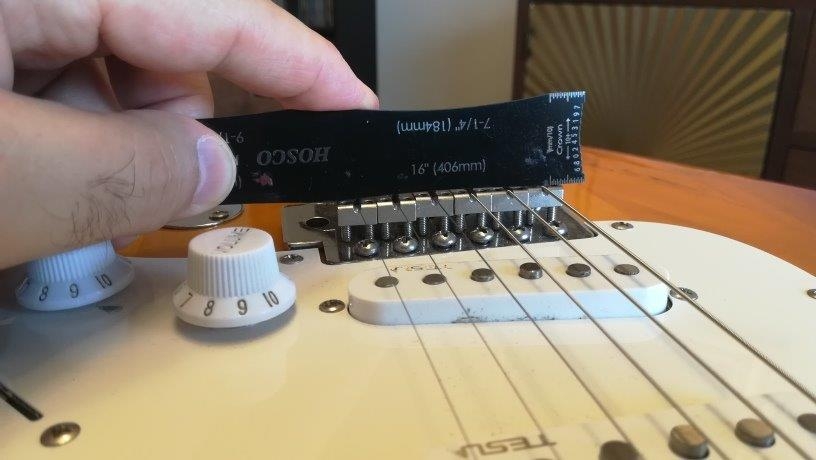 A hint about the stud tailpiece

The Gibson school stud tailpiece height can be adjusted, especially in relation to the bridge. The string angle between these two parts has an important influence on general tension and finger feel while playing. We will talk about it again. For now remember that strings should not touch the TOM edge leaving it into the tailpiece.

A hint about the nut

As we know, our guitar strings are stretched between two points: the bridge and the nut. The nut features factory made grooves. However, sometimes the grooves are not precisely cut, or we simply prefer different depths from factory standards due to our playing requirements and pleasantness of fretboard contact.

Though there are useful height adjustable nuts, these are seldom adopted by manufacturers and usually opposed by guitarists. So, talking about the classic bone or plastic set nut, its adjustment is a matter for professional workers, who know how to lower and raise it completely, or just working on single grooves with shims, files and glue mixed bone dust.

What we humble guitar players can do is to verify that the nut height makes our playing comfortable and in-tune. If the nut is too low, you will hear the strings buzzing if open or in the first positions; if the nut is too high, you will experience trouble in playing and intonation.

Once you have set the height of the first and sixth strings and made the other strings follow the fretboard radius, it is possible to optimize the saddle curve according to your taste. 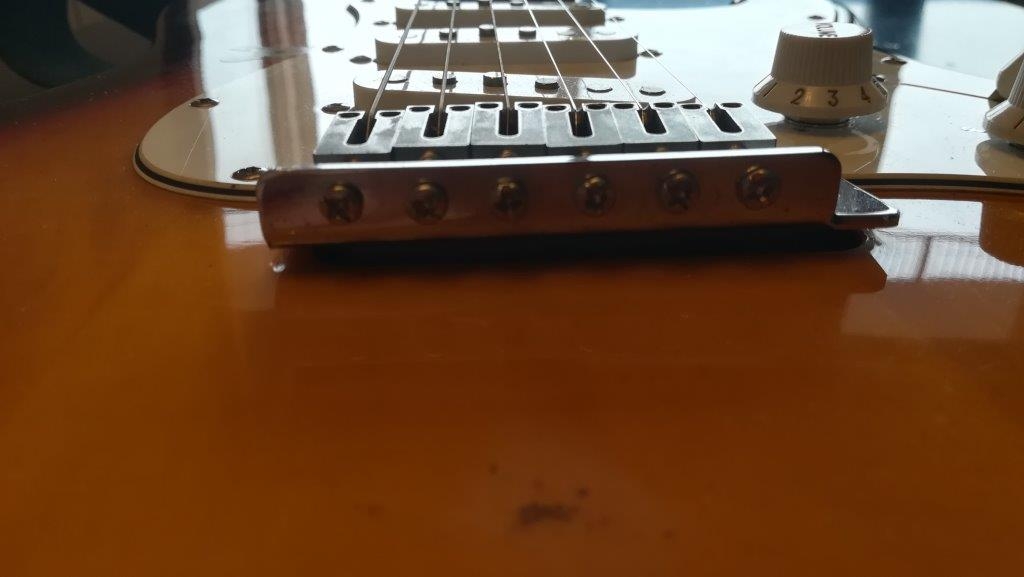 Adjust and try to play, adjust again and play again, and again... Finally you will get an instrument as you wanted it, with a properly straight neck and strings set at the desired height for your playing!

It's not over, though... An article on the Soundsation blog will deal with the crucial adjustment of intonation!