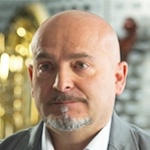 Without getting into details, the main difference is that, in free aerophones, the vibrating air is not contained within the instrument, but the sound is generated directly by a sound wave in the surrounding air. To this category belong the free-reed instruments, like the harmonica, the accordion, the harmonium, or instruments where the sound is generated in the air by a vortex, like the hiss of a whip or by the fast rotation of an object.

The second large typology of aerophones comprises the non-free aerophones, or wind instruments proper. In Western culture, instruments are often indicated and classified with the historical denomination of Brass and Woodwind, based on the materials they were made of in the past, and, even if nowadays these denominations are inadequate, these terms are still widely used.

In the large family of woodwinds we have: flute and piccolo, clarinet and bass clarinet, saxophones, oboe and English horn, bassoon.

On the other hand, the brass family comprises: trumpet and cornet, trombone, tuba, basso tuba and flugehorn, French horn.

In ancient times, the first double-reed instruments had the shape of pipes and shawms well-known in Egypt, China, Arabia e Greece. During the centuries this instrument evolved noticeably. The Oboe descends from the XVII century shawm, an instrument with a very conical bore and a piercing and loud voice (almost like a trumpet). Only in the following century it took the shape we know today, more graceful, the polished lines now are sinuous and elegant, the tone becomes much more smooth, with a wider dynamic range, and all the notes of the chromatic scale can be played with a consistent timbre from the lowest to the highest pitched notes. Since these modifications the oboe parts from its ancestor, beginning its own evolution. In the following centuries came further modification, with the addition of more keys in order to facilitate trills and difficult passages and key systems with automatic opening, the most important being the octave key, operated by the left thumb.

The modern oboe is commonly made from Ebony or Grenadilla (an African wood also used by the most famous brand thanks to its density, workability and dimensional stability, a very important property). Less frequently used – but not less valuable – are woods like the rosewood, while the keys are made of nickel silver, silver-, nickel- or gold-plated.

Note range of the modern oboe

Used mainly in the chamber and symphonic orchestra, the voice of the oboe is particularly evocative, sensual, sweet and sophisticated, especially during the most lyrical and intimate passages, with an unrivalled expression in his family.