Finding out the different types of analog distortion/overdrive pedals may seem hard, but facilitation it is actually possible if you divide them in few large families based on their circuit styles.

Before continuing, we assume that the reader already knows the differences among various pedal effects for guitar and bass players, as well as the topics covered in other articles of the Soundsation blog about: effect chain organization, involved electric quantities, kinds of buffer and bypass, amps/effects interaction.

We are going to deal with the various families of distortion pedal effects (also called stompboxes) in a succinct and comprehensible way, giving general indications of which ones best suit our needs.

Therefore, in this article we will focus on dynamic pedal effects such as overdrive and distortion ones, all designed to square the wave!

To better know distortion effects, we can divide them in three big families:

Before continuing, it is worth saying that all distortion effects do the same thing: they square the electric signal wave that comes from the electric guitar they are connected to (clipping).

The different names that were assigned to these pedals through time have commercial reasons: suggesting a desired sound, proposing a sensorial suggestion or a link to famous artists, popular music genres, vintage products, giving them unique identification in the increasingly crowded commercial panorama.

That said, their function is to amplify the electric signal until its squaring is obtained, the effect guitarists perceive as a pleasing distortion. Any kind and model of pedal get this result in slightly different ways, using circuit enrichments, mainly in the tone network, that give a certain tonal personality.

I am going to refer generically to them as overdrives.

Fuzz is a type of transistor overdrive, in which the gain that is necessary to amplify the input signal up to the clipping is obtained with two, three or four transistors and, sometimes, diodes. In the beginning, germanium transistors were used, later substituted with silicon ones, that were more affordable and stable from an electric and thermal point of view.

With the advent of integrated circuits, operational amplifiers (op-amps) were used in fuzz design, trying to maintain the sound dimension that word implied. So there are fuzzes and similar effects based on germanium or silicon, transistors or op-amps, with or without diodes. There are not fixed rules, but some purists think that a true fuzz should be made with transistors and no diodes. We are going to develop this topic in a specific article. So, what can we expect from each fuzz kind, besides their shared progressive cleaning up in sound as the gain is reduced? 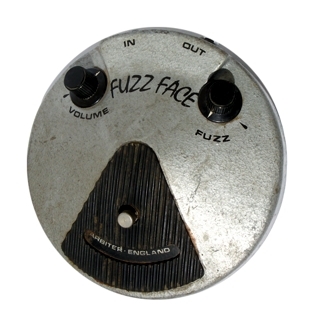 Germanium fuzz: quick distortion, massive sound, grainy or fuzzed lows, smooth highs, sometimes they are difficult to control and show variable behaviour according to power supply and temperature (in vintage models). Let us remind ourselves that the power of certain frequencies it is not always so noticeable in the live mix of a band, unless we are playing in a power trio. Example: early Arbiter Fuzz Faces since 1966.

Silicon fuzz: solid sound with prominent mids and trebles, controllable lows, flute-like distortion in the best models, effectiveness through a live mix. The most common example is the (Dallas) Arbiter Fuzz Face after 1968. I should also mention the Electro-Harmonix Big Muff since ’69 till today; but, being their circuit also based on diodes, purists do not consider them actual fuzzes. The same is true for Big Muff versions that use an op-amp instead of transistors.

Why choose a fuzz

Fuzz distortion is extreme (but mostly unsuitable for metal) and produces strong vintage colours. Over the years, fuzzes have been living glory and neglect times, but today they are highly in use again, often in alternative ways by a new guitar players generation. Aggressive, iconoclast, but also sophisticated and lyrical in the hands of an inspired soloist. A fuzz is necessary to reproduce iconic sounds of rock, perfect with a Strat style guitar and a British style amp, great with the bottleneck. A fuzz in your arsenal is an imperative if you are a rock guitar player, though it is not your main distortion pedal. Considering that the circuit must dialogue with the guitar pickup by design, it is very important that the fuzz (as the wah) is placed as first on the pedalboard, directly connected to the guitar cable, unless there are only hard bypass pedals in the midst. 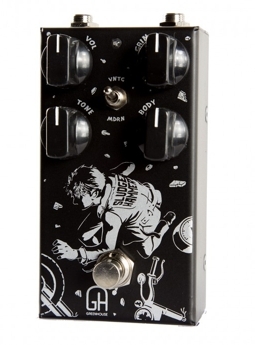 Transistors are used in some distortion pedals that are not fuzzes. They often have names that contain words such as drive or blues that can mislead. The aim is creating a cascading stages of gain by means of transistors; the sound effect is aggressive and defined at the same time. Distortion stays attached to notes, allowing a neat attack and a clean fast performance with alternate picking. Examples: 1995 Boss BD-2, early Boss DS-1 from the end of the ’70s (op-amps were used later) and generally some distortion pedals that promise to simulate the sound of a British amp.

Op-amp based fuzzes are quite rare and have a heavy rock sound with more gain than transistor ones, very aggressive, prone to harshness in the middle to high frequency range. Nevertheless these fuzzes have made the fortune of rock bands as the Smashing Pumpkins. Example: Electro-Harmonix Op-Amp Big Muff Pi.

Having op-amp fuzzes been mentioned, let us focus on op-amp overdrives. They substantially are of two kinds: soft-clipping and hard-clipping.

One of the most known and popular categories of soft-clipping overdrives is the various tube and various screamer one, with op-amp and diodes based circuits. 1977 Boss OD-1 was the first model of this type. It featured a 3403 quad op-amp. 1979 Ibanez TS808 was the second one, and it is still the most popular and copied. It featured a 4558 double op-amp, around which a certain mythology has been generated. The famous Japan Radio Company (JRC) 4558 IC was used in vintage Tube Screamers, and later substituted with analogous chips made by other companies. It is featured in a multitude of pre-amp circuits in different effects and solid state amplifiers of any level. In both Boss and Ibanez cases the real core of their sound – warm, compressed, emphasized on the mids and anything but transparent – resides in brilliant designs more than in their cheap parts. Subsequent steps of compression, mild clipping, low frequencies de-emphasis and middle emphasis are aimed at simulating a saturated tube amp and easily cutting in the mix. 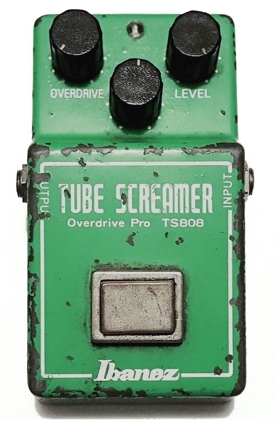 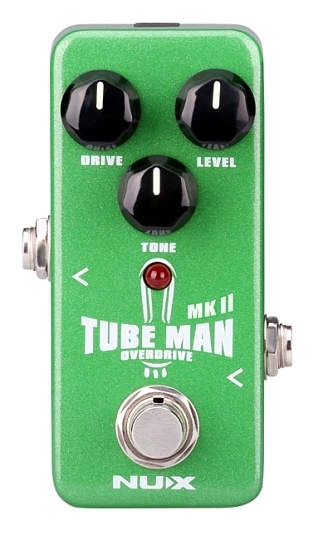 Pedals such as the 1991 Marshall Blues Breaker and its emulators offer a soft-clipping sound too, but more direct, much less EQ manipulated and decidedly more transparent.

In this category we can find distortion pedals in which single and double, not particularly famous op-amps are used to roughly square the whole guitar signal with no frills. In fact they produce the typical ’70s rock sound that sometimes is on the edge of a fuzz tone. Classical examples are the MXR Distortion+, the DOD Overdrive Preamp/250 and the ProCo Rat, all presented in 1979.

The outsider 1994 Klon Centaur by Bill Finnegan is among the most noted and sought after overdrives. This pedal features circuit section diversified power supplies and a double gain potentiometer that always retains an amount of clean signal in the distorted output, thus permitting extraordinary dynamics and definition. Its diodes are germanium ones, but we must consider that they do not come to play until the gain knob is well over half the run; otherwise, the behaviour is that of a clean booster. 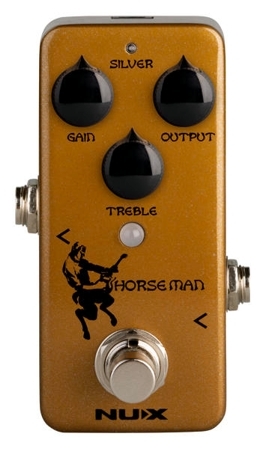 The are also particular C-MOS (double MOS-FET) IC based overdrives such as the 1978 Electro-Harmonix Hot Tubes and the ‘90s Way Huge Red Llama. They simulate a tube amp in a sort of analog modeling circuit. The sound varies from boost to nearly fuzz, and is very touch responsive.

Why choose an op-amp overdrive

There is an overdrive of this kind practically for any music style need and for any guitar player. 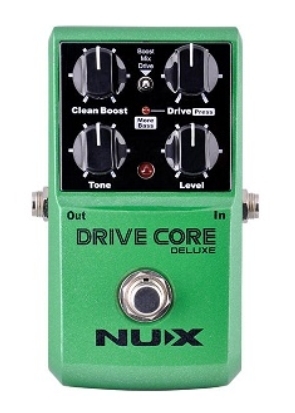 If you love smooth and round sounds that keep this qualities when the gain knob is set high, you can choose among a lot of soft-clipping pedals that are crowding the market. You will find original reissues, clones and fine interpretations. They are well suited to blues, fusion, pop, rock, in short to all genres, including modern jazz. They are regularly used by shred guitar players to push the lead channel of the amp and facilitate legato and tapping techniques. They are usually tailored to cut at best and pleasantly through the mix.

If instead you love ’70s rock music, straight and gritty distortion with little compression and guitar faithful sounds, you will probably prefer hard-clipping overdrives. There are a lot of models for any taste. They are usually played by heavy metal, hard rock, rock-blues and fusion guitar players that aim for an aggressive and biting sound. They are not so well suited for pop and melodic styles.

Outsider overdrives as the Hot Tubes and the Centaur are good for guitarists searching for alternative and personal tones. In the case of the Hot Tubes and similar pedals, dynamic and sonic attitudes are close to an old tube amp (including flaws). In the case of the Klon and some of its great, ahem, clones, ability in using pedal, guitar, amp controls is required. The sound is neutral, greedy of gifts, very responsive. Basically, what is there at the pedal input comes out without a big help in modifying the sound paste. A good guitar and a good amplifier are required.

It seems there are not so many members in the tube overdrive category, but actually they are not so rare. Over the decades a lot of models have entered the market. The most famous is surely the late ‘70s progenitor Tube Driver. Technician Brent K.Butler originally designed it to make its keyboard distort as Jon Lord’s Hammond organ with The Deep Purple. The pedal that resulted from that design was sold under the Chandler and Tube Works brands, and has been often imitated. 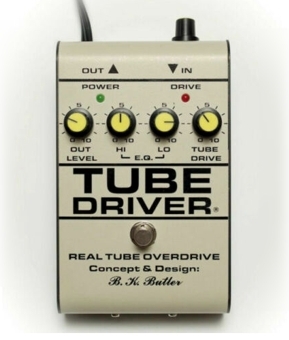 Other well known tube overdrives are the 1996 Ibanez Tube King, the milder Plush Valve Job by Fuchs and early 2000s Damage Control (Strymon today) large pedals, that were at the limits of size and functions of real floor preamps such as the ones built by Mesa/Boogie, Soldano or Brunetti.

How to use tube overdrives?

Tube overdrives often are bulky and also need a specific power supply – if not a wall socket – because of one or more tubes inside them. Sometimes they can work with the 9V voltage and requested current supplied by an external power unit, but never by a battery. You must consider this when you think of integrating them in a pedalboard.

At its best the overdriven sound actually is an overloaded preamp tube sound, but this does not mean this is what we are searching for: hot, compressed, beveled in the treble range, think to Eric Johnson or Kenny Wayne Shepherd. It is great for bending and legato techniques. In other cases, it is more about donating warmth to a solid state generated clipping. In order to understand which type you are facing, a sign is given by its power supply: 9 Volts usually means the tube hardly has a big influence on sound. Try before you decide: you could find your own dream overdrive, or no longer want to know about it!