How to choose an electric guitar (pt.1) - The Body

This article is dedicated to the different body types of the electric guitar, in particular to the different structural features, and, most important, discusses how they influence the sound.

Most of electric guitars are solid body, that simply means that the body is made from solid piece of wood without any sound box. Sometimes, synthetic resins are employed instead of wood, that nevertheless is the most commonly used material. Many types of wood are used, each one with definite physical, timbral and aesthetical characteristics.
Without any sound box, the sound of a solid body guitar is entirely amplified using a “pick up”, an electronic device that uses the magnetic fields generated by permanent magnets. Matching the pick up with the wood and the body shape plays an important role in defining the global sound of the instrument.

In the hollow-body guitars (also called semi acoustic), a large portion of the body is empty (with some models with completely hollow body), with “f” shaped holes on the top, similar to those on the strings bowed instruments. As the hollow body is especially prone to acoustic feedback, the soundboard of an hollow body guitar is often made with laminated wood, that can naturally damp this unwanted vibrations. For the same reason, the rest of the body is often crafted with laminated wood. Sonically speaking, this translates in a more delicate and rounded sound, really suitable for jazz, or opened and bright, perfect for genres like rockabilly.

Today archtop guitars, equipped with pickups, can be considered electric guitars in every respect, but were originally built as acoustic instruments. Named after the shape of the body, convex in the vertical direction, the top has two “f” shaped holes, like those found in hollow bodies guitars. Archtop guitars are usually carved from solid wood, using techniques typical of bowed instruments manufacturing. The amplification employs the so called “floating pickups”, that is, pickups that do not touch the top of the guitar, and the controls are installed on the pickguard too, in order to maintain intact the vibratory performance of the top of the instrument. Mainly used in genres like jazz and blues, is often hand crafted. Over time, arched tops were successfully used for solid body guitars too.

Bolt-on neck: the neck is attached to the body using screws (usually three or four). The resulting sound emphasizes the mid-high frequency band, and is dryer in the mid and low end. Nevertheless there are economical benefits (the manufacturing process is easier) and in customisation possibilities (for instance, it’s easy to unscrew a neck and use it with another body).

Neck-thru body: the neck extends through the entire length of the body, becoming the core of the body itself. This results in a longer sustain, optimal tonal balance along the entire spectrum, perfect alignment of neck and body, easier playability thanks to an easier access to the higher frets. But any adjustment of the neck-body jointure becomes impossible, nor the substitution of the neck as in bolt-on models. Of course this solution cannot be applied to hollow bodied guitars, that have a sound box in the central portion of the body.

Set-in neck: the neck is glued to the body. Here we find the same long sustain and tone balance of the neck-thru body construction, but we retain the possibility of acting on the neck-body jointure if required (with the help of a good luthier, as we are dealing with glued parts). 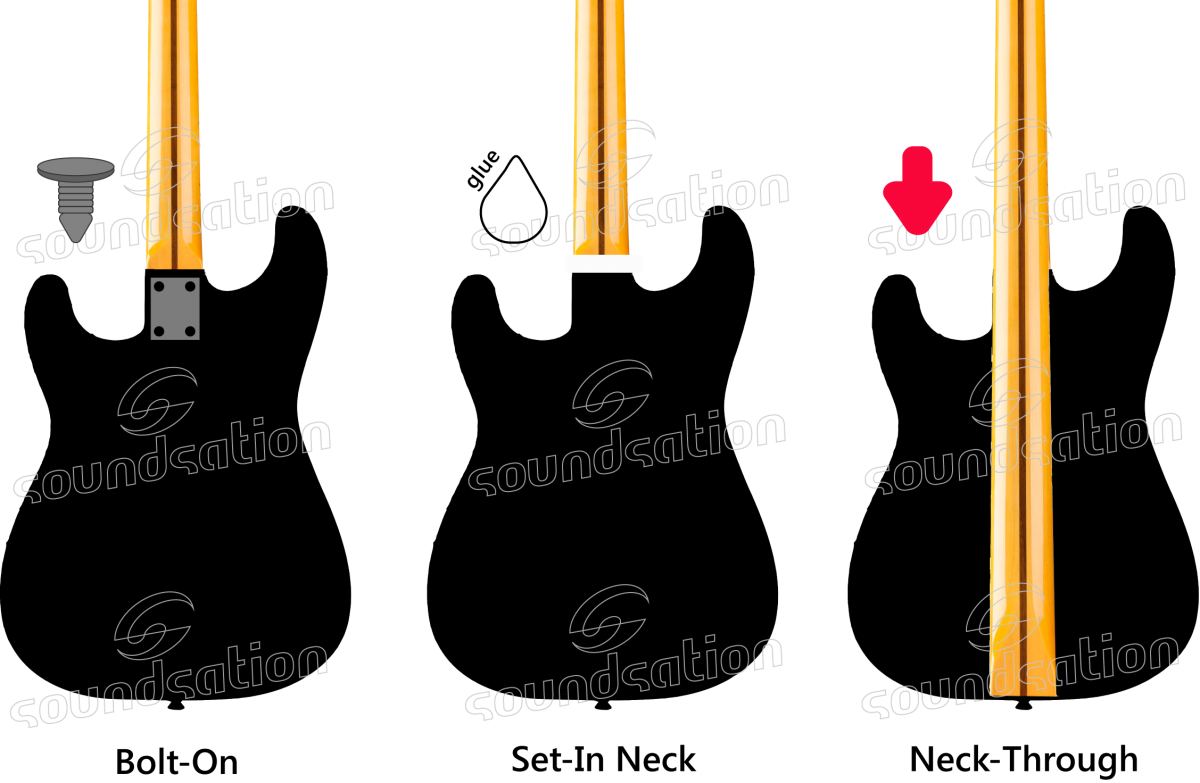 Wanna know more? Read the next post How to choose an electric guitar: neck and fretboard. Enjoy!