How to choose an electric guitar (pt.2) - Neck and Freatboard

Shape and radius in a nutshell

A fundamental part of a stringed instrument is the neck (and of course its fretboard), as this is the part of the instrument that is touched by the musician's fingers. While we can discuss necks and fretboards technically, we feel that we cannot give advices on which is the best typology to choose, as the relationship that each musician creates with his or her instrument is so personal and intimate that this choice must take into account the personal tastes and subjective sensitivity of each musician.

From a technical and building point of view, two elements play an important role when we talk about necks and fretboards:

When we talk about the shape, we are referring to the different kinds of curvature of the section of the neck. This kind of curvature is indicated by a letter, that best represents the shape itself. For example, V-shape indicate a wedge shape, while C-shape indicates a much softer curvature.

The most common shapes are: U-Shape, D-Shape, C-Shape, V-Shape. La V-shape can be further defined using the adjective hard/medium/soft, depending on the slope of the sides. The neck is a crucial element as for the feel offered by the instrument, and consequently there are no rules that can leave out of consideration the personal taste of the guitar player. Generally speaking we can assert that V-shaped necks can be found on guitars used in musical genres where speed of execution of the lead parts is crucial, like in rock metal.

The fretboard (or fingerboard) is the long strip of wood, laminated to the front of the neck, where frets (small metal bars of different sizes) are inserted. The radius is simply the curve of the fretboard itself. It is a segment of a circumference expressed in inches, and as a result, the longer the radius the flatter the fretboard. On the contrary, a shorter radius corresponds to a more convex curvature. The most common radius are: 7.25″ – 9.5″ – 10″ – 12″ – 16″, up to a maximum of 20” or even totally flat fretboards (like those of classic guitars or some electric models). 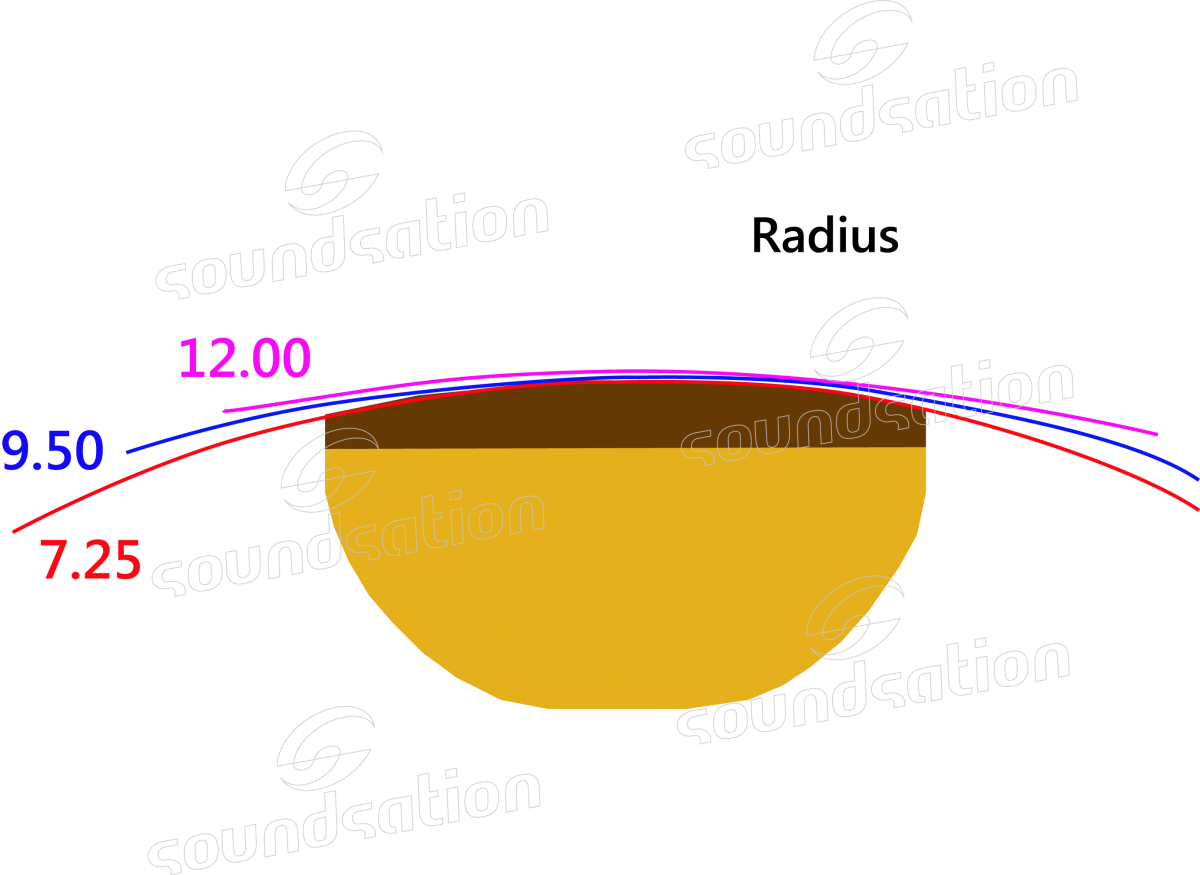 Guitars with a longer radius (and consequently a flatter fretboard) are preferred by musicians who need a low string action, easy bending and speed of execution: for these reasons they are mostly used in musical genres like hard rock or metal. With shorter radius, chords become easier to play, but the strings will have to follow the fretboard’s curvature, with a higher string action. We want to make clear that the radius alone does not determine the playability of a guitar, but must be taken into account as a starting point when adjusting the action of the strings in order to obtain a balanced set-up of your instrument. The final results in terms of feeling, clearness of the sound, playability, sustain, etc., depend on this set-up process of the instrument. Of course, the musician plays the most important role with his or her personal touch, sensitivity and taste: so it becomes impossible to define an ideal radius, and the same instrument can be more or less playable depending on the guitarist.

The rule of thumb is always try it yourself, without been influenced by classifications and technical details!

The truss rod
In order to counterbalance the strings’ tension, keep the neck in the correct position and set up the action (the distance between the strings and the fretboard), a threaded metal rod whose tension is adjustable is inserted into the neck. How does it work? To correct the curvature of the neck (and of its fretboard) you can act on a simple nut and washer system. You can find different variations of this system in almost all electric and acoustic guitars, but normally it is not employed in classic instruments.

As for the technical solutions of the neck-body joint, you can refer to the discussion of the different kinds of bodies