How to choose an electric guitar (pt 4): woods

Which woods are used and which are their different properties?

Electric guitars and basses are made out of wood, so it is important to learn how to recognize them and to know about their main esthetical, physical and sonic characteristics.

In electric instruments, different kind of wood are used for the body, the neck and for the fretboard (and for finishing). Each one has his own esthetical, physical and sonic properties, and also the cost can vary depending on the quality of the single timber lot. Let’s take a look at the different woods most frequently used in the construction of electric instruments, summarizing the typical properties of each one.

Maple is an heavy wood with a compact grain, emphasizing the mid and high frequencies (similarly to ash and alder, as we will see in a while). With a particularly light colour and beautiful figure, maple is mainly used for necks and fretboards, but also for tops or bodies. A maple top, besides being a beautiful aesthetical addition to the guitar (especially if it is flamed, marbled, birdseye, quilted, etc..), can positively influence the global tonal openness of a mahogany body, for instance, putting together a deeper sound and a faster attack. 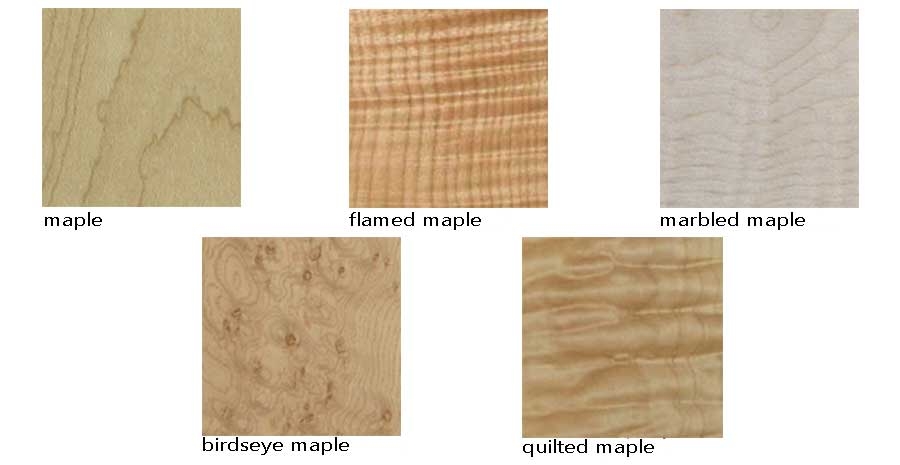 Rosewood
Very dense, heavy and expensive, is used for the fretboards of electric instruments. Especially beautiful, with noticeable grain and brownish coloured. Soundwise, combines mid-high frequencies emphasis to a long sustain, thanks to its peculiar resonance. Many different qualities can be found (from India, Brazil, Africa, etc..), some of them very valuable.

Ebony
It is a very dense, heavy and compact wood, extremely dark coloured and without grain, so valuable and expensive that is used only for fretboards and finishing.
Soundwise offers a strong emphasis of the high frequencies of the spectrum, and feels very hard.

Mahogany
Mahogany is a rather dense wood, with a really fat and warm sound (thanks to its grain) and a very long sustain. Aesthetically has a typical red colour, sometimes with valuable figures.

Alder
This is a light wood, typically light-coloured, with noticeable grains that make it an ideal choice for transparent or sunburst finish. Sonically is considered one of the most balanced woods, without emphasis on any frequency band.

Used for: body with transparent finish

Ash and swamp ash
The main property of the ash is its specific gravity. Like alder and maple, its peculiar sound emphasizes the mid-high frequency band. Aesthetically, ash has a diffuse and well visible grain, suitable for a beautiful transparent finish.
The swamp ash variety, expensive and very well considered, combines a slightly lighter weight and a very good balance between clearness and warmness of the sound. Swamp ash is also suitable for a transparent finish, that makes its beautiful grain pattern stand out.

Used for: body with transparent finish

With no visible grain patterns, basswood is frequently used for bodies with coloured finish. Sonically similar to maple, alder and ash, with more focus on the mid-band that makes the sound stand out in the mix.