How to choose the right mixer for Home Recording?

This third and final installment is dedicated to choosing the right mixer for home recording, a practice within music production that has experienced enormous growth over the last twenty years. This success goes hand in hand with the introduction of digital technology. A mixer can help hugely throughout the process, especially managing signal flow in and out of your DAW.

The term “Home Recording” is one immediately understable, even for those of minimal knowledge of industry “terminology”. It identifies a practice that is very much in vogue amongst modern day musicians - a way of producing music that can be considered to be in contrast to the recordings made in dedicated environments, such as the “classic” recording studio.

On a slightly higher step of the hypothetical ladder of recording, we find the "project studio"- considered as a middle ground between home recording (often done in one's own bedroom) and the recording studio. The project studio is usually a more structured environment, often situated within a suitably equipped place in the house and, ideally, with adequate acoustic treatment of the room in order to obtain a better listening environment.

As we’ve already noted, a real distinction cannot be made in relation to quality or alleged professionalism of home versus studio recording. Despite what the "purists" of recording may say and profess, it is a fact that today, by looking at resulsting recordings, the claim that extremely professional productions can only be made in a professional studio can no longer exist. One of the most recent and striking examples of this is the album “When We All Fall Asleep, Where Do We Go?” by Billie Eilish, which won five statuettes at the 2020 GRAMMYs, plus a host of other awards. This album, by the artist's own admission, was recorded for the vast majority at home, in their childhood bedroom.

Even if our ultimate goal isn’t to win five GRAMMY Awards (although we should never say never...), it is certainly a good shout to read this mini-guide, so as to achieve a firmer grasp of the topic and to be able to choose the right tool for the job. 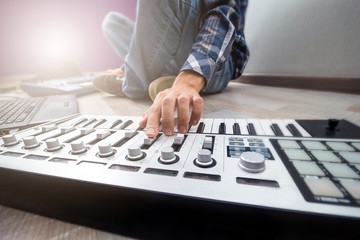 Even before talking specifically about the mixer, it is necessary to explain what is meant by DAW - the beating heart of our home studio. The Digital Audio Workstation (DAW) is nothing more than a recording station that allows you to record a certain number of tracks (channels) through digital technology. All instruments that produce analogue signals, such as guitars, voices and keyboards, must be recorded digitally. To do this, their analogue signals must be converted into digital signals (an almost infinite series of O/I) and transferred onto a medium capable of storing and processing these data, ordinarily a hard disk.

DAWs can be "all in one" tools with input channels, converters and level management - actually very similar to mixers - or, as has been happening more and more often recent years, they can be made up of a computer that serves as the “core”, alongside a series of peripherals that include, amongst others, the sound card.

The sound card, now the most commonly used tool for home recording, is a device capable of pre-amplifying the input channels and converting the signals from analogue to digital before then feeding them into the mixing software. The delicate operation of converting the signals from analogue to digital is entrusted to the converter capable of performing the AD/DA (analogue-digital and vice versa) operations with a certain degree of accuracy. You can find a great variety of converters on the market, running anywhere from tens to thousands of euros.

The use of the mixer

In the scenario just described, it could be imagined that an external mixer is not so essential. However, it is a practically omnipresent instrument in almost all home recording and project studios. So what’s the main reason for the inclusion of a mixer? Comfort.

In fact, the mixer is often used as a "service" tool, a center for aggregating signals and where the various input and output channels can transit, meaning they can be managed immediately and quickly through a few simple steps. In addition to this, it should not be assumed that the sound card has microphone preamplifiers of comparable quality. Therefore it is often preferred to use those of the mixer, before sending the balanced signals to the converters of the sound card, ready to be recorded.

Without a doubt, one of the main reasons that most choose to use an external mixer in the home recording field is the management of signal routing. This allows for convenient control of a host of processes - the possibility of using headphones in a simple way, opening and closing channels for the various instruments, and mixing sources in an "analogue" and non-virtual way. This still remains one of the easiest and favoured ways to work. Doing all these things through a virtual mixer on a computer, using a mouse, is something that still remains uncomfortable and tedious in 2020.

We must therefore imagine this mixer as a tool, a device that serves to facilitate the workflows of the home recorder themself, rather than to complicate. In the same way, especially if we decide to use the mixer preamp section, it will be necessary to rely on a mixer equipped with a good microphone preamp. Regardless of any lectures related to sound quality, a preamplifier must be able to guarantee adequate headroom and a good signal-to-noise ratio. In the link provided by WiKipedia, the displayed figure clarifies the concept very well. 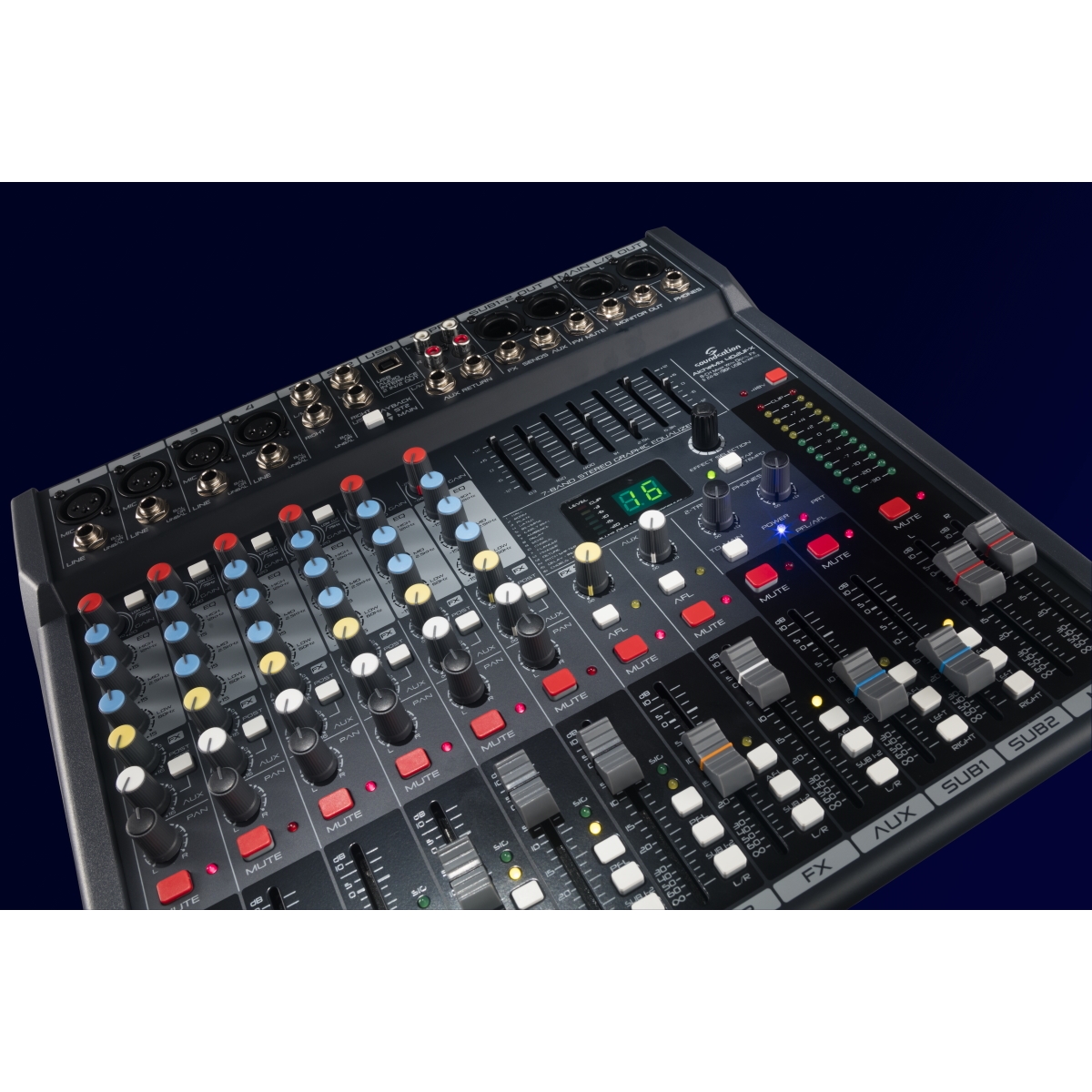 Once again, the number of channels we need depends on our real needs and it is therefore difficult to recommend an "appropriate" number. As an approximation, however, there are a couple of possible scenarios that depend substantially on the sound card chosen and on our approach to recording.

Sound cards are able to record a certain number of channels simultaneously, depending on the number of physical inputs on the card itself. The concept is the same as the old "track count" of reel tape recorders - 4, 8, 16 and so on. If we look at consumer or semi-professional sound cards, it is common to deal with peripherals with a stereo input channel (two mono channels) without microphone preamplifiers or, at best, only one channel with a preamplifier dedicated to an instrument (such as guitar) or to a microphone. As is obvious, as the spending budget increases, it is possible to buy a card with more inputs and more preamplifiers. But, as mentioned several times in this section, we like to consider our choice based on keeping overall expenditure figures manageable.

So, how do we record our band in the rehearsal room when using a simple card with only two inputs available? This, in the real life of the musician, is a fairly frequent scenario that can be solved using the dear old mixer. At one fell swoop, you can preamp and mix the various channels before sending the stereo mix to the stereo IN of the sound card. Additionally, if the mixer has any internal support for direct recording (onto USB stick for example), then everything will be even more comfortable. But that's another matter...

The advantage of using the mixer in a situation such as the one just described also allows us, potentially, to use the AUX section of the mixer as a monitor line (listening through headphones), avoiding entering into the digital domain and therefore protecting ourselves from any potential latencies associated with digital monitoring.

As mentioned - before focusing on which mixer to choose, it is good to make some basic choices regarding the equipment used for recording. These choices depend on our needs within the studio. Having identified the "core" of the system, consisting of of a computer and sound card, it is time to identify which mixer we need, considering the most important features for this application to be as follows:

We have arrived at the end of the final installment of this first section on mixers and, as you may have understood, the intent was certainly not to make comprehensive guides on technologies and products. Nor was it to advertise the products belonging to Frenexpeort, who have conceived and supported the initiative, but rather to provide a series of simple steps that we believe will be useful for many music lovers to follow when not knowing which products to turn to.

Despite this, when looking at particular Soundsation products, it is easy to identify a number of mixers that closely match the desired characteristics above. In particular we could suggest the MioMix and Alchemix series. Happy choosing and above all... happy music-making!