Digital technologies for electric guitar: from universities to music – Part One

Birth and development of digital amplification for guitar

This article is dedicated to digital technologies applied to effects and amplification for the electric guitar. We will start from the dawn of the information technology and arrive to the birth of the first musical digital products.

To get an overview on the electric guitar and its amplification development in the first half of the 20th century, please read the article about tube amps. Here we are going to talk about digital amplifiers.

In this first part of the article we’ll concisely and distinctly deal with:

In the second part of the article about digital amplifiers we’ll deal with:

Prelude of the digital era

It may seems curious, but, to find the first footprints of a path that seems to belong to our days only, we have to go back very far. Let’s just mention seventeenth century “ computer specialists” such as Blaise Pascal or Gottfried Leibniz, and English man Charles Babbage’s attempts to make mechanical computers based on punch cards for weaving machines in the nineteenth century. Finally, a great and somewhat obscure mathematician without a degree took care of “translating” human logical mechanisms in algebra: George Boole. 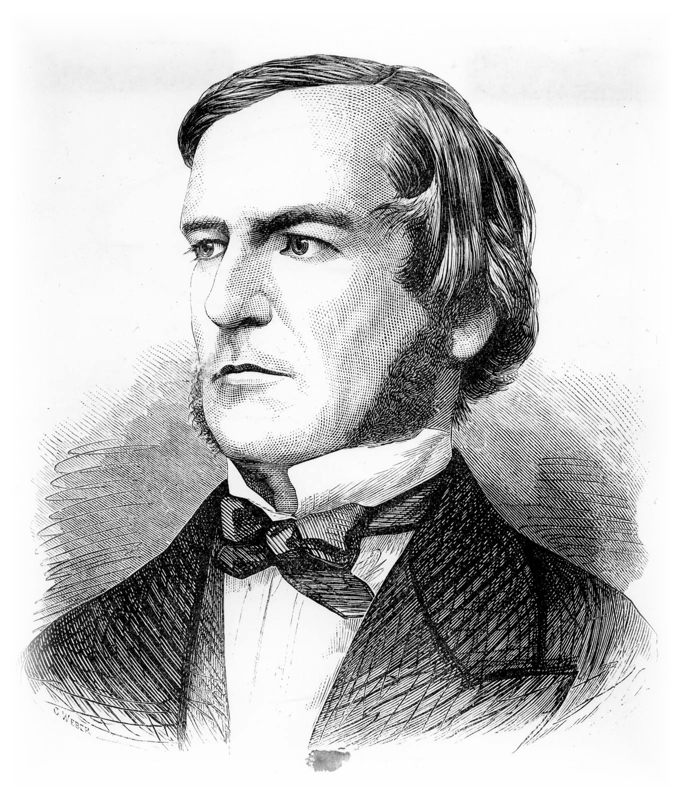 By the half of the eighteenth century Boole build a mathematical system called boolean algebra. Instead of the usual math operations (addition, subtraction, etc), in this system operators such as AND, OR and NOT are used; the only two acceptable values are True and False, also represented as 1 and 0.

A curiosity: in this mathematical scope the operator BUFFER was also defined; it leaves what is received passing through unvaried: does this tell you anything? 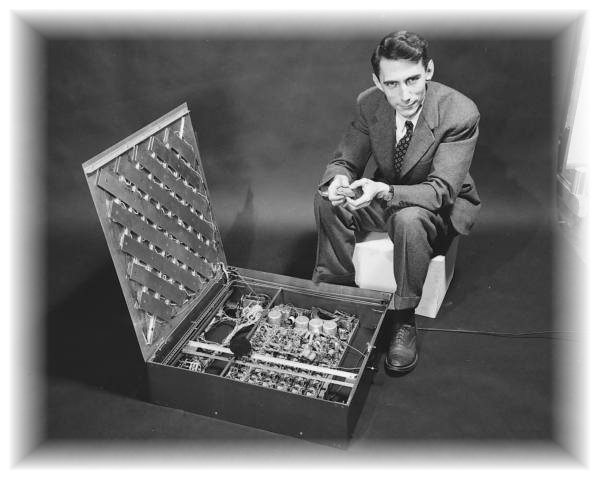 Let’s go ahead in big digits, um… steps to the ’30s of the twentieth century. While contemporary information technology fathers as Alan Turing were already at work, in 1938 U.S. mathematician and engineer Claude Shannon was processing the studies of Japanese NEC researcher Akira Nakajima and accomplishing a Master’s degree in Electronic Engineering at the MIT (Massachusets Institute of Technology) with the thesis A Symbolic Analysis of Relay and Switching Circuits . He applied boolean algebra concepts to electro-mechanical relays – for which the only two possible states are True/False (On/Off) – thus starting the digital circuits design and the digital communication of information. His bulky electro-mechanical circuits made use of relays as On/Off switches (who has already read our article about solid state amplifiers will start to understand…) following software instructions. Bell Labs company – where Shannon worked – took advantage of the study for telephone networks. Shannon also was the first one to shrink the term digit and talk about bit, the elementary digital unit that, by 8, makes one byte.

A curiosity: quickly working to transmit information, relays heated up a lot. Bugs disgracefully perching on them suddenly died. For this reason a cleaning or debug was needed from time to time!

The way to miniaturisation

The first electro-mechanical computers were followed by military tube ones. Until now we have been talking about very large sizes. In 1954 Texas Instruments started mass-producing transistors. In 1968 Italian physicist Federico Faggin studied for Fairchild a technology that made it possible to insert several transistors and components in one single integrated circuit (IC; cf the image of Faggin’s first IC). 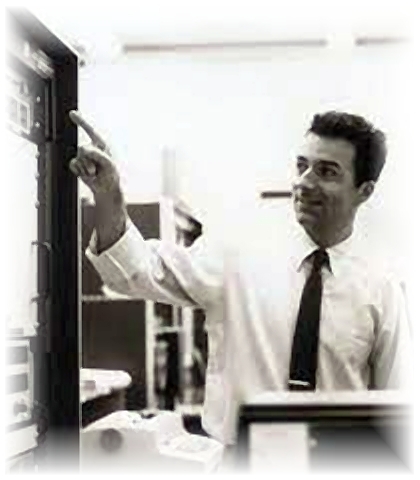 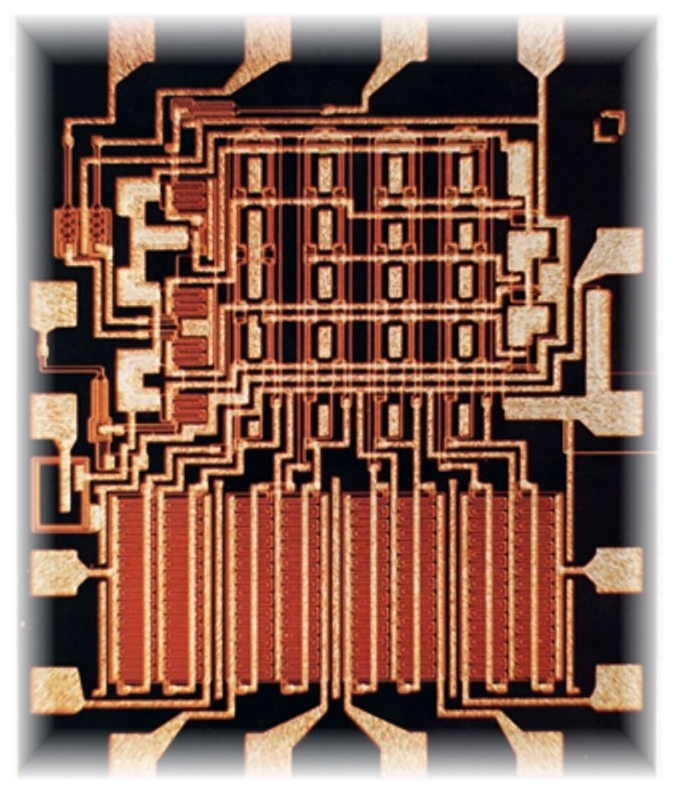 Since then the miniaturisation race has never stopped, taking all the progressive advantages in designing, size and cost reductions. We should also remember that every miniaturisation stage coincide with an increase in processor speed; in fact, since the internal cells are nearer every time, the distance the signal has to cover is shorter.

The foundations of digital effect generators for guitarists were implied in what we have briefly described. Their electronics do not give an analogue treatment to the electric signal (continuous in time) but a digital one, converting it in a binary code (0-1), therefore in data that can be managed and modified by a written and saved software. The analogue to digital transformation process is known as A/D conversion. Due to most of afterwards devices, an analogue signal is again needed after digital processing; this is obtained converting digital data by means of a final D/A conversion. Quality of A/D and D/A conversions is connected to two values: sampling frequency in kiloHertz and resolution in bit. Since the ‘80s, starting values of 44,1 kHz 16 bit (the standard for audio CDs) have been improving up to 96 kHz 24 bit of current effects and recording devices. 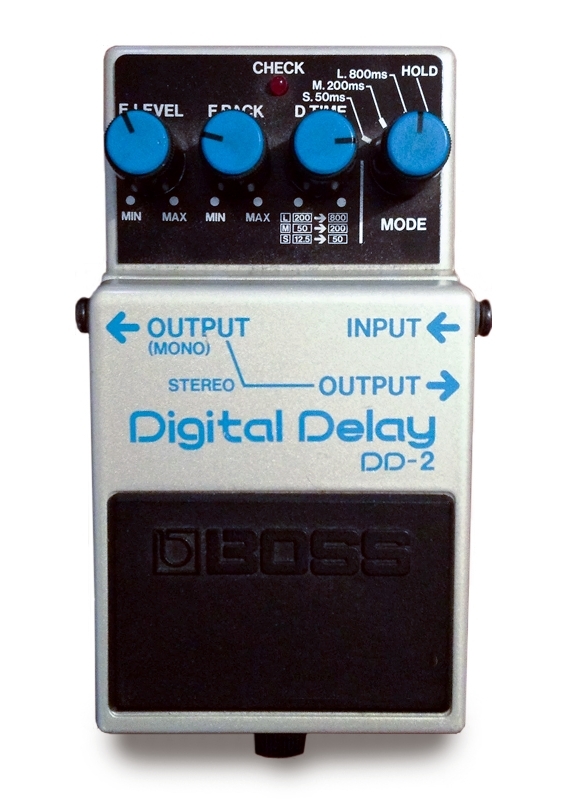 First digital implementations for guitar players are found in some ’80s effect pedals (the Boss DD-2 delay was the first one in 1984). In that decade and in the following one rack effects appeared and increased in number and types; at the beginning they mostly were delays and reverbs, increasingly more powerful and efficient, with rooms, halls and delays recreations progressively more accurate thanks to powerful processors, often proprietary, and more affordable memory banks. Preamplifiers and multi-effects (from DigiTech, Zoom, Art, Rocktron and other manufacturers) were assembled inside a single chassis to which the guitar was connected, while the output was send to a power amp and a cabinet, even in stereo, or directly to a mixer or recorder if the machine was equipped with a direct output and a cabinet simulator. [In the pictures: 1993 DigiTech GSP 2101 and a basic multi-effect algorithm; note dedicated dry path for input analogue signal].

This was a complete and complicated arsenal guitar players could manage thanks to the birth of the MIDI (Musical Instrument Digital Interface) protocol, designed with the backing of big Japanese keyboards manufacturers.

What is a digital processor?

A digital processor is an electronic digital circuit that, after converting the guitar pickup signal in binary code, allows its manipulation: distortion, equalisation, compression, reverb and many other effects, both dynamic and aesthetic, are added to the original signal according to musician’s desires and machine capacity. After processing, the result is reconverted – with some approximation – in an analogue signal to be send to the devices at the end of the signal chain: the power amplifier (usually a solid state one) and the loudspeaker.

In digital multi-effects a fundamental technical solution is desirable: the split of analogue signal and digital flow in two parallel paths, that are combined again at the output. Compared to a tout court code conversion of the input signal, splitting the processes allows to keep the appreciated qualities of analogue signals (referred to electric guitar), and take advantage of mixed effects at the same time. The arrival of amplifiers with parallel effect loops made this solution no more essential, being the mixing directly available at the loop stage.

A great evolution in digital processors is represented by the arrival of digital simulations (calling them emulations is not precisely correct) of amplifiers, cabinets and effects, initially thanks to software, dynamic and tone nets (preamp, EQ, compression, etc); afterwards, thanks to digital samples, though not for guitar use.

In the second part of the article we’ll go to the guitar digital amplification core, talking about integrated machines, digital amplifiers and simulation software with skills not predictable just some years ago. Well, the best is yet to come!

Paul Nahin, The Logician and the Engineer: How George Boole and Claude Shannon Created the Information Age , 2013 Princeton University Press