Progressions in digital amplification for guitar since the 1980s

This article is dedicated to digital technologies applied to effects and amplification for the electric guitar. We will start from the dawn and arrive to the most advanced solutions: digital amplifiers. We’ll deal with digital multi-effects, physical modelling, IR cabinets and practical suggestions

To get an overview on the electric guitar and its amplification development in the first half of the 20th century, please read the article about tube amps. Here we are going to talk about digital amplifiers.

In the first part of the article we have concisely and distinctly dealt with:

In the first part we have talked about information technology seeds between the ‘800 and the ‘900, and then about the first electronic digital applications to the guitar world. In this second part of the article about digital amplifiers we are going to deal with:

By the end of the ’80s a new technology appeared; it was already studied during the previous decade, though restrained by insufficient performance of processors: we are talking about physical modelling. Yamaha Corporation has the marketing credit; the company had already collaborated with the Stanford University in developing the FM synthesis (frequency modulation synthesis, a renowned example of which is the Yamaha DX7 synth). In 1989 Yamaha started a collaboration with the same Institute in order to get and patent the Digital Waveguide Synthesis. In 1994 the first physical modelling synth appeared: the Yamaha VL1, the ancestor of a historic change that was going to have a very big influence on guitar. 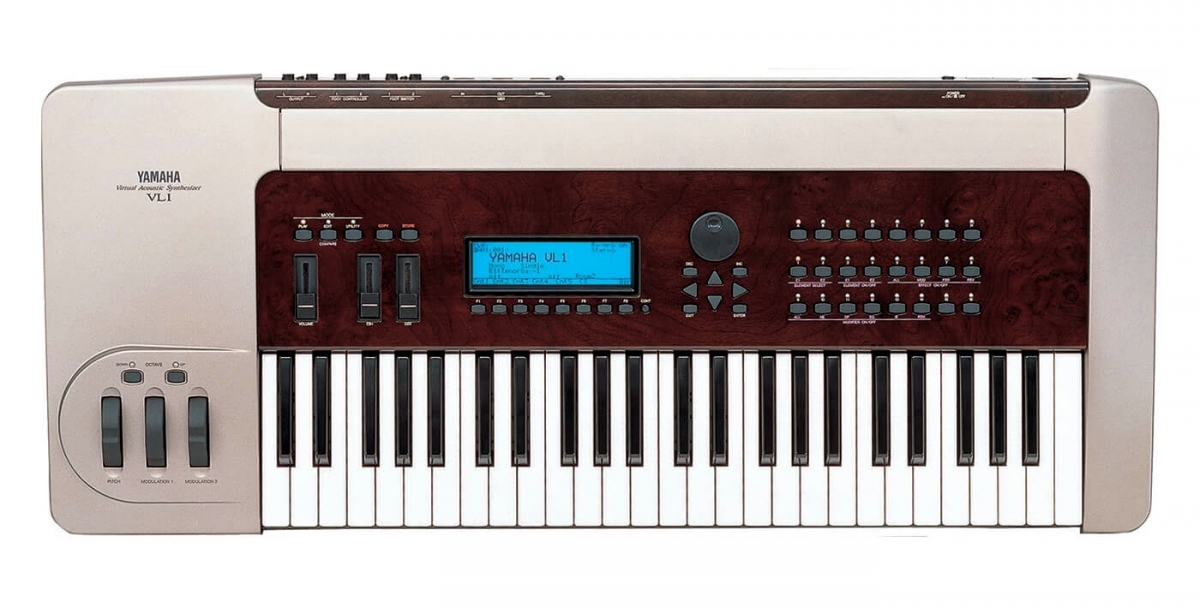 In the physical modelling synthesis a digital model of the sound generating instrument is recreated, for example a plucked string (time depending); the physical medium through which the sound is spreading (a constant), the kind of instrument and the vibration with its possible restrictions, the string elasticity and gauge, player’s touch and lots of other parameters are also recreated. The denser and more refined is the analysis, the more compliant the simulation (a basic example of a clarinet partition is shown in the drawing).

Compared to the past, the difference is substantial: instead of trying to reproduce a sound by means of synthesis (from Hammond organ [additive synthesis] to Moog synth [subtractive synthesis] to samplers [sampling synthesis]), physical modelling itself produces a sound from mathematical recreations of instruments, that, at this point, can be fantasy products too, with their shapes and materials, propagation spaces and musical rendition accents.

The gates of Hell – or Paradise, if you prefer – were opened and the physical modelling simulation started targeting every possible sound producing object. In the guitar field this means electric and acoustic guitars, every kind of amplifier, speaker, effect pedal, with special attention to vintage ones, that are finally available, though as virtual versions, for musicians searching sought-after and peculiar sounds for their productions. 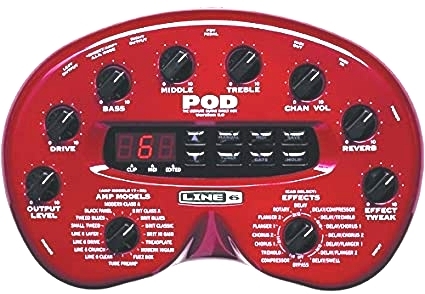 Among the brands that looked after physical modelling for guitarists since the ‘90s let’s mention Roland (VG-8 guitar synth, 1995), Line 6 (Axsys 212 combo amp, 1996; POD multi-fx, 1997) and the Yamaha Corp. (DG amps, 1998). Previous high end digital multi-effects were outclassed in a short time, though refined solid state simulators, such as the Tech21 Sansamp, remained. In the third millennium powerful and always updated digital machines continued to be proposed until top products as Fractal Axe-FX preamplifiers arrived. In 2011 German firm Kemper introduced the Profiler. In addition to its resident amp models, this machine offers an innovative approach; in fact, it allows the user to make its own traditional amps profiles, including their speakers, the microphone and possible plugged in pedals. The obtained models can be shared online among musicians or purchased from new profiling professionals. 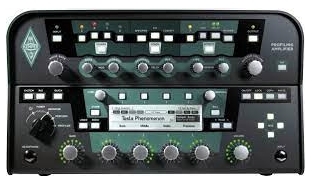 A following version of the Kemper Profiler was equipped with a class D power amp . The circle was closed by a true complete digital amplifier with hundreds of amps and effects models and a digital power amp.

Digital power amps, or class D power amps, are by now common in many Hi-Fi, Pro Audio and consumer devices. They receive the analogue signal, convert it in an impulse sequence tied to the input signal amplitude and frequency (PWM), then amplify it at the output with an efficiency unthinkable for analogue power amps.

When using a digital music machine we always have to keep in mind that we are not using a tube amp or an analogue pedal or a wood guitar, notwithstanding the finess and effectiveness of its user interface. What seem to be potentiometers are nearly always encoders, converting their given movement into digital data; parameter settings are “translated” following our human habits. A good fruition of a digital machine actually needs a friendly approach from both of its faces. The first very successful digital pedalboards, often provided with analog sections, offered scarcely intelligible panels and unexpected or unpleasant sounds. This often was because of guitar players’ poor knowledge of basic settings such as volume and gain, layout of effects modules in the signal chain, active equalisation as opposed to passive tones, etc.

In the recording field, a personal knowledge of most known and historically recorded amps and pedals is surely advisable, especially in rock music. Following blog as this one and digital recording forums certainly can be a great help in sharing information and other items.

Let’s sum up some great advantages of digital amplifiers:

Staying in the high quality machines sector, the only drawback is represented by tradition and vintage keen guitar players’ feeling that digital sound is “colder” and “less dynamic” than tube and best solid state amps. Actually, if this comment can have some reason in live use, in the studio and in a totally digital domain it seems quite insignificant nowadays. Even the most famous rock players are abandoning real room recording of amplifiers with miked cabinets.

The risk of sudden crashes on stage is also more and more rare.

The rest is history these days. We can count on integrated machines and physical modelling simulation software that are capable of producing every kind of guitar sounds, for recording and live playing as well, with tone and dynamic qualities that were unpredictable at the beginning. Physical modelling is more and more reaching modelling amplifiers with a great quality/price ratio. 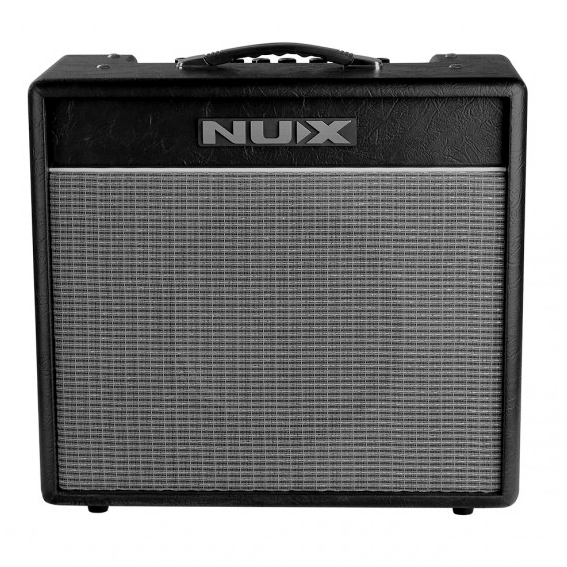 In the next years developments and refinements in music information technology will make continuous important improvements. This is the case of recent IR (acronym for Impulse Response) cabinets, that complete a cab model with the algorithm of its response to a full range impulse, materials, volume, rooms, simulated microphones and their positions, etc, all designed to give us a digital sound increasingly responding to the reference physical reality.

Digital implementation resulting from psycho-acoustic studies, often not stated, are integrated in consumer goods and in some cost effective guitar amplifiers to get tone features of higher level models. 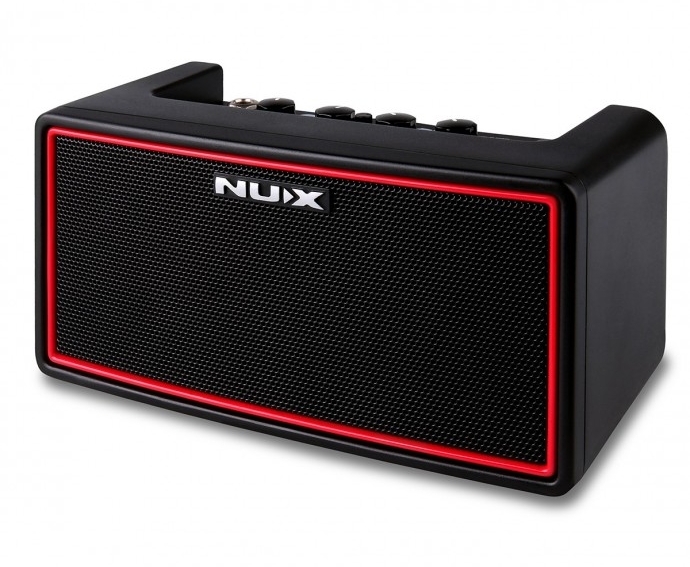 The old “hard and pure” analog amplifier seems to be more and more far from the minds and habits of young musicians, as well as from pros searching convenient solutions for their business.

Digital evolution is a running train not to be missed in order to keep pace with music!