In this article we are going to deal with electric guitar amplifiers based on mixed or hybrid designs, those in which different technologies such as tube, solid state and digital ones are used to a variable extent for the same purpose: assuring a good guitar sound.

To get an overview on the electric guitar and its amplification development in the first half of the 20th century, please read the articles about tube, solid state and digital amps.

In this article we’ll concisely and distinctly deal with electric guitar hybrid amps based on a:

Once solid state amplification was made available (please read our article on the Soundsation blog), mixed circuit amps soon appeared on the guitar and bass players market; in these projects, tubes, transistors and/or integrated circuits (ICs, chips) were variously used in a single design. The aim has always been to get sounds with tubes distinctive dynamic and tonal features, but reducing cost, consumption and weight.

By the end of the 1970s, the Peavey Deuce e the heavy Mace amps were among the first professional amplifiers of this kind, also significant for a decent commercial distribution. In the first years of the 1980s the Music Man RD series was equipped with a solid state preamplifier and a tube power amp , usually based on a couple or a quartet of EL34s or 6L6s. The Music Man RD-50 was a forerunner in its preamplifier composition, designed by Leo Fender at the time when his C.L.F. Research was departing from being a Music Man supplier. This did not prevent the RD-50 from housing Fender designed Limiter tube circuit ; it was based on a 12AX7 tube and used to compress and smooth distorted signal peaks. It’s worth stating the lead channel stages of this amp: SS first gain stage -> EQ -> SS second gain stage -> tube limiter. 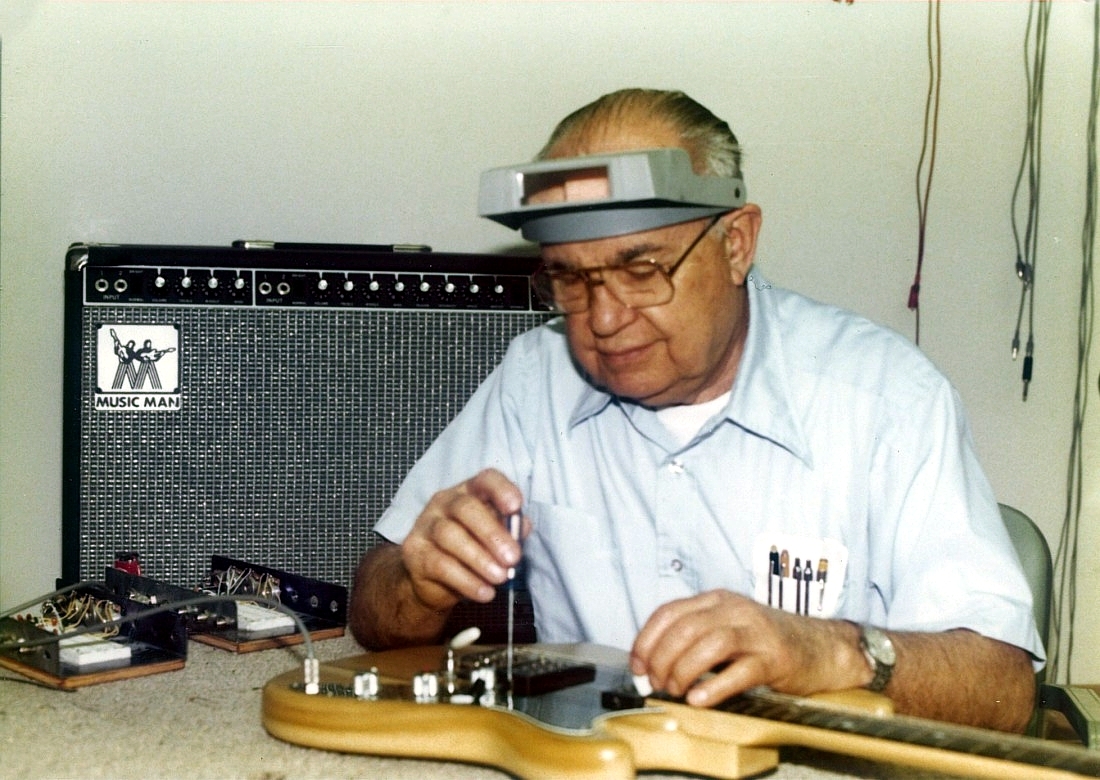 There are lots of more distributed and cost effective amps, such as the Marshall Valvestates, used for amateur, semi-pro and professional purposes, until they became a standard. An integrated circuit preamplifier and a distortion generating network of diodes are combined in the design, while a preamping tube warms up the sound. This tube is sometimes ironically defined as “placebo tube” by technicians; it’s followed by the EQ section and a solid state power amp. 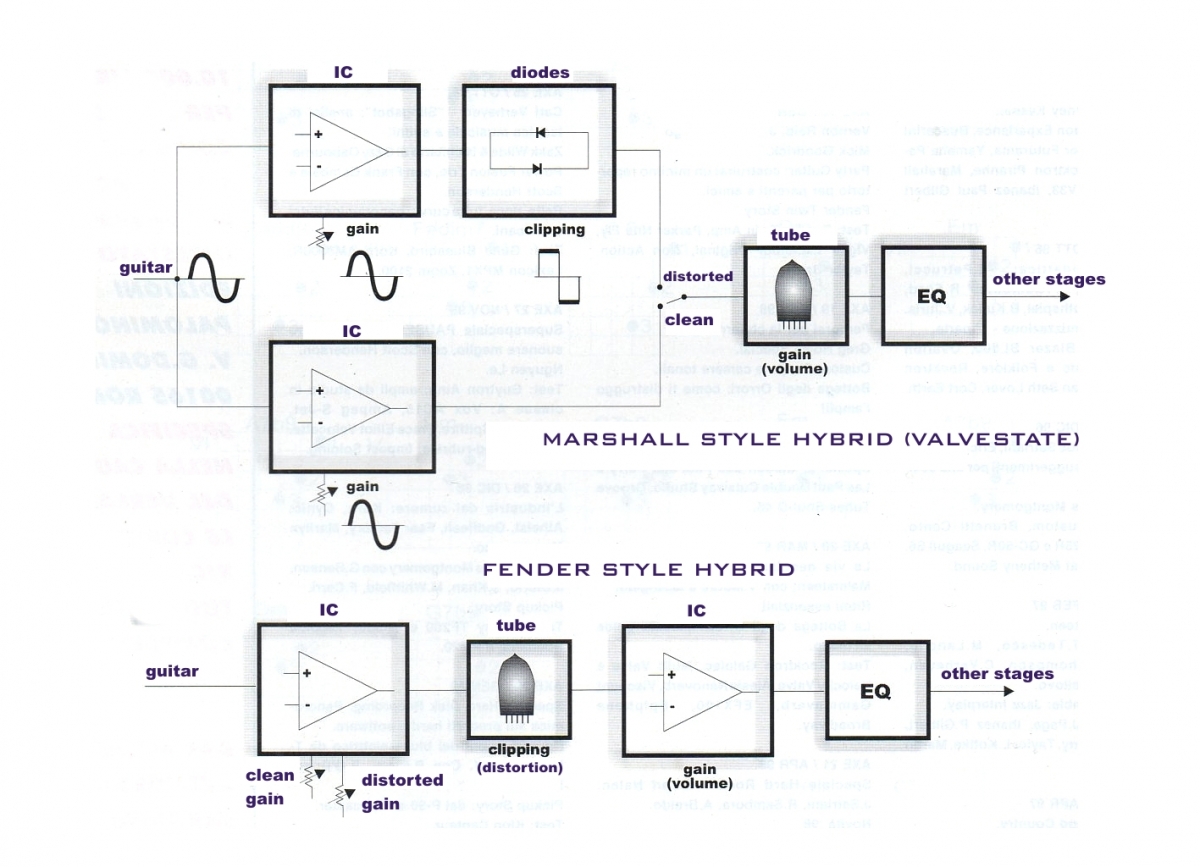 Marshall implemented the distortion generating diode network – just as in a common distortion pedal – in well-known tube amplifiers as the second JCM800 series – the two channel with reverb one –, and the JCM900.

An alternative design, such as adopted by Fender, is based on a preamplifier with ICs controlling a real tube generated distortion, followed by the EQ stage and a solid state power amp.

It is worth remembering Gelf amplifiers, peculiar for having a real tube preamplifier – in origin designed for Who’s Pete Townshend – and a solid state MOSFET power amp.

According to many, the difference is substantial, because the first design sound definition has a dominant solid state nature: a while pleasant wave clipping or squaring with just a tube tint.

In the second case, one or more tube stages define the distortion quality with a tube like saturation effect.

An only functional variation of hybrid circuit is the totally tube preamp and power amp with solid state components operated auxiliary and utility functions: for example, channel selection, effects loop, cabinet simulated output, and so on. This is the case of a lot of multi-channel modern tube amps. Impact on sound is next to nothing, except for the effects loop and, especially, for the difference between tube or diodes rectification of AC current, being a diode bridge rectifier more effective but “harder” in sound according to many.

In the totally solid state field, there are a few ICs based models with some worthwhile sections of the signal path entrusted to discrete components (transistors) instead of ICs; this happens in Peavey TransTube amps, for example.

A further kind of hybrid amplifier for electric guitar, though uncommon, includes a real tube preamplifier and a solid state power amp; amps built by Dean Markley and Legend belong now to the vintage world. 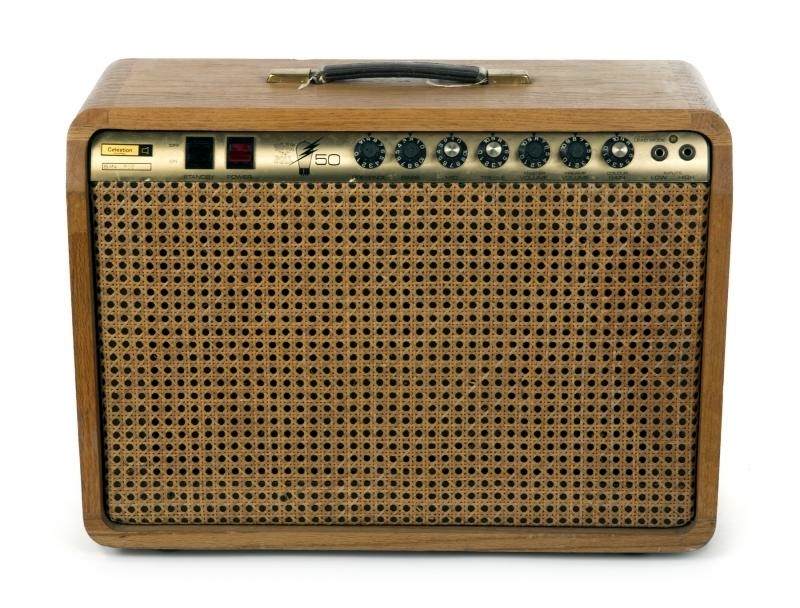 Switching to digital/solid state and digital/tubes hybrid circuit guitar amplifiers, there’s plenty of choice. The 1970s technology breakthrough of LSI (Large Scale Integration), that is the integration of components by hundreds in a single chip, was followed by VLSI (Very Large Scale Integration) and ULSI (Ultra Large Scale Integration). Compared to the time when I was a rocker kid, unimaginable peaks have been achieved nowadays. Physical modelling (or modeling for US readers) has also arrived in the years, and it is diffusely dealt with in a specific article on the Soundsation blog.

Leaving out old solid state/tube models with just a simple digital control, let’s see some kind of hybrid digital preamplifier among the most diffused on the market.

Though there are some outdated examples of digital preamp/multieffects with an analog solid state generated distortion (as some Zoom pedalboards and 1990s rack preamps), the most frequent digital/analog hybrid models depend on a preamp tube integration, and sometimes even a little 1W tube “power amp” driving a real solid state power amp, as in the Vox Valve Reactor line. In the case of the Line 6 Spider Valve , two 12AX7 preamp tubes and two power 6L6 are used, leaving the task of amps and effects simulation to a modelling section. This shows how various are hybrid proposals on the market, thus making guitarist’s choice very complicated.

Still talking about “hybridisation”, there also are tube amplifiers that have a digital effects section, as the Bogner Alchemist.

Let’s start with some words about the solid state/tube hybrid technology. Some of the cited amps are examples of great built and sound quality. Their designers were often searching for a precise guitar sound idea. Some of those amps marked an era and were used by outstanding guitar players , such as Eric Clapton, Mark Knopfler and Billy Gibbons. All you need is to be able to distinguish between cost saving purpose hybrid design (always existing anyway) and models that are able to retain sound quality or even offer a fine original sound. Let’s go hunting therefore: in the second-hand market great amps are accessible at prices that are very lower than those in their release time.

Let’s go for the best

Switching to the digital front, it’s important to know how the signal is distributed through digital code and analog paths in the hybrid amp we are interested in. Sound, dynamics and perceived volume at the same power level largely depend on the above mentioned differences.

If your approach is utilitarian and maybe home recording aimed, an all-digital, all-modelling choice is probably the apter. 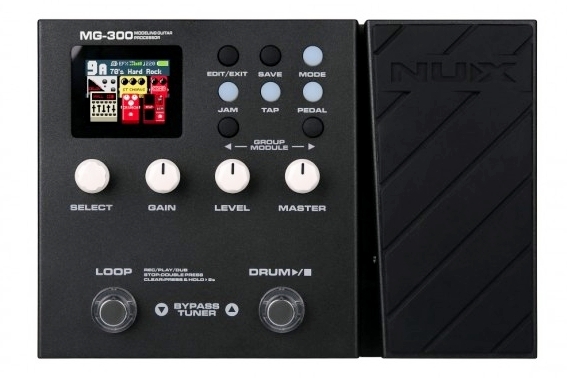 Instead, if you would like to effectively use some tube sound qualities and in the meanwhile get plenty of amps and effects simulations, the range opens to tube power amp models. Given the quality of today’s physical models, profiles and A/D D/A conversions, I personally feel that a tube power amp is much more desirable and effective in assuring the sound difference than one or two little tubes in the preamp.

If you are using physical models and cabinet simulations it is extremely important that the power amp and the cabinet have linear audio reproduction specs, nearer to a P.A. system rather than to a guitar cabinet.

Anyway, let’s rely on engineers and developers, who normally are increasingly able to carry out a satisfying guitar sound. And while we are at it, let’s try to get the maximum of possible utilities in terms of links, DIs, outputs, loops and so on.

Once you’ll have made your choice, do not think to be safe for long. The GAS (Guitar Addiction Syndrome) is always lying in wait, ready to make us desire something newer and more useful.

It happens the same in today’s technology ruled fields – as well as in stock quotes: a spasmodic search not only for the new thing, but for the new new thing! It’s the case of handling apps and Bluetooth link in more and more practical and complete digital amps.

Recently new physical modelling amps have appeared on the market, featuring preamp and power amp integration of Nutube components, a kind of triode Korg has designed from display tubes. 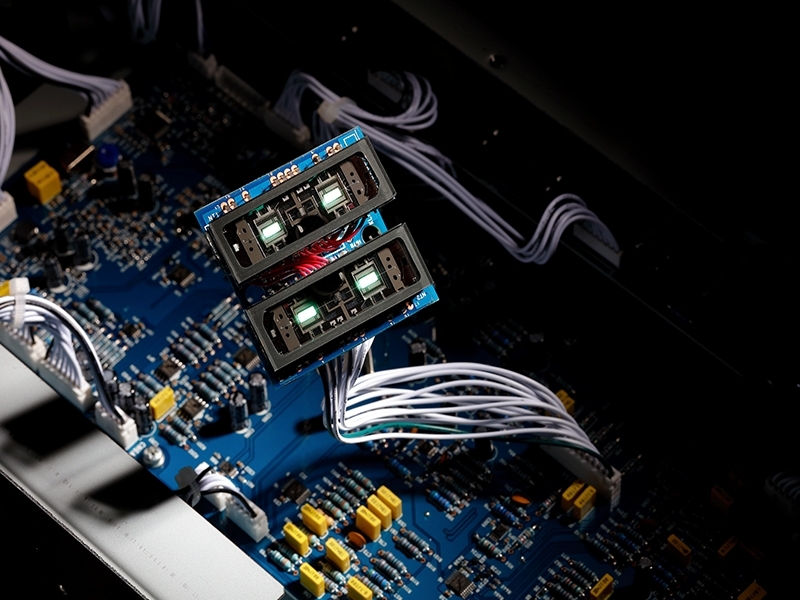