The setup of your guitar (PT 7): setting a vintage style vibrato

How to adjust your electric guitar six screw vibrato bridge.

In this article you will find instructions and tips about the setting of vintage style vibrato units on electric guitars, with special regard to models used on strat or super-strat instruments . This is part of the general setup of the guitar , that involves topics covered on the Soundsation blog as intonation, pickup and action adjustments.

Before continuing you should have:

All that verified, we can talk about how to self-adjust a vibrato bridge with springs, also called vibrato arm or tremolo, and even tremelo (somehow wrongly: in Italian tremolo is a volume variation and vibrato a pitch variation, whereas it seems in English these terms could be crossed): 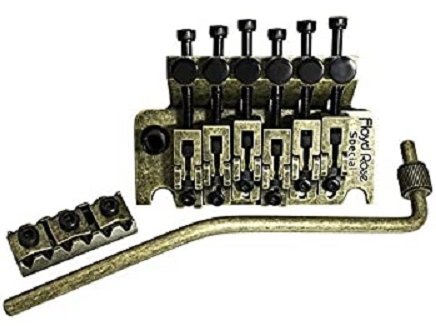 All mentioned kinds can have matched locking tuners that clamp strings inside the shafts and prevent tuning loss (within certain limits). In Floyd Rose derived models there is a string locking nut. In this article we concentrate on the classic Fender vintage school vibrato .

Elsewhere on the Soundsation blog I deal with floating bridges as the Floyd Rose and the Wilkinson, besides historical models as the Bigsby and the Gibson Vibrola. 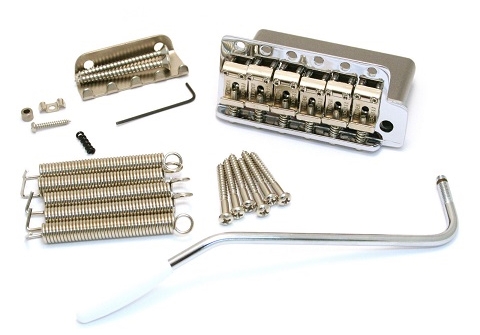 Let's start from the beginning, that is from the Fender “synchronized tremolo” system due to Leo Fender's dedication and to country guitar player Bill Carson's guide in the Stratocaster development.

This kind of vibrato is so popular and well-known that I am not going into a detailed description. It is sufficient to remember that the base plate tilts on six screws. A number of two to five springs connects the sustain block (a metal body that is screwed under the vibrato plate) and the guitar body by means of a metal piece with five claws. A lever or arm is inserted into the vibrato body and makes it possible to loosen string tension and lower the tuning in a synchronous way. 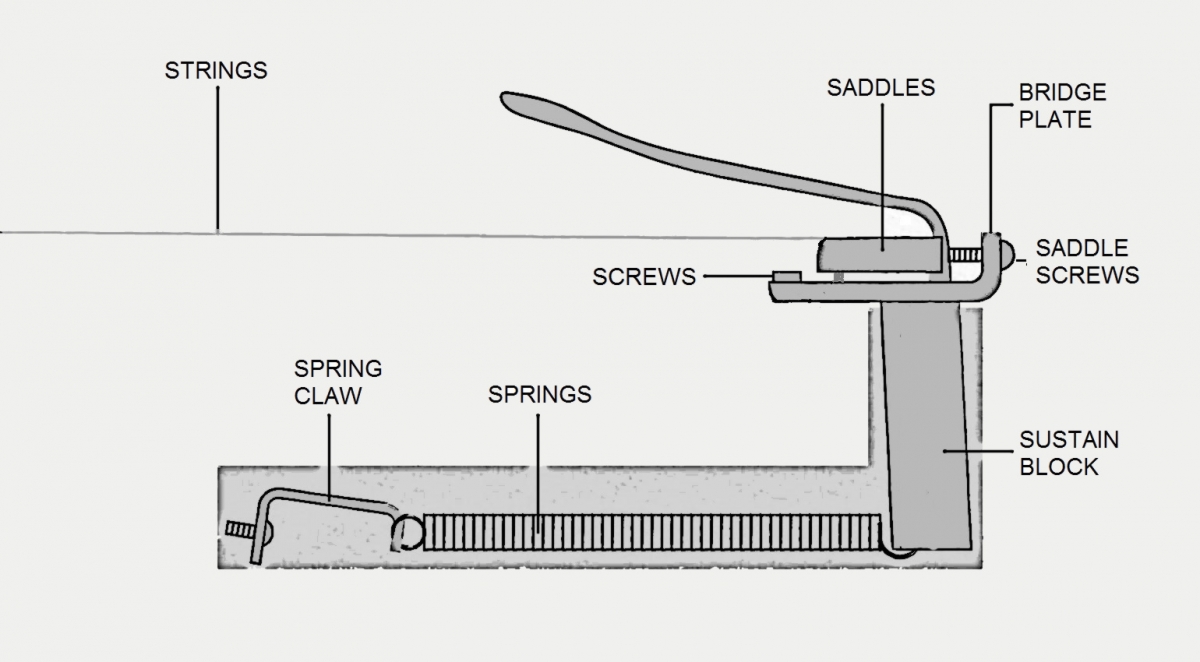 Parts and materials of a vibrato

In the world of electric guitar there isn't a device with a more undefined and “unregulated” setup, since each guitar player can set it up according to his preferences. So I shall suggest a generally accepted coarse adjustment , that is however subject to variations.

In relation to the six screws, they can be adjusted too: tighten them until they are aligned onto the bridge plate, then unscrew for about a quarter of turn. You can unscrew even more the central screws but slightly. Somebody prefers to remove them totally and let the two outer screws make the work. Generally they are able to stand up the stress and the vibrato behaviour resembles a two pivot floating smoothness and consistency .

The more the bridge plate is well worked and the edges are well shaped, the better your vibrato will perform. Some countersink bevels around the back plate holes, those in contact with the guitar body, thus making the hole border to screw contact similar to a knife edge one. 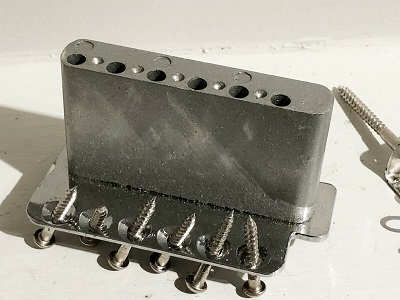 Some sustain blocks are thinner than vintage style ones to allow arm use in both directions preventing it touches the guitar body inside the spring hole. It should be remembered that the sustain block material and mass , as well as the saddle ones, are very important towards the sound. Steel is mostly appreciated, but brass and zinc alloy are used too; pressed metal powder can be found in cheaper models.

The overall quality of a vibrato bridge, including springs, is fundamental to get a quality sound ; it has to do with the general tone, the vibration transmission velocity and the sustain.

The quality of the screws and hole machining are important too, especially for the performance smoothness and precision.

On this '50s born remarkable vibrato bridge, instrument action and intonation can be setup acting on six individual saddles, as you may have read in the articles “ The setup of yourguitar (Pt.3) – How to adjust your guitar action based on the kind of bridge” and “The setup of yourguitar (Pt. 4) – Setting intonation”. Before doing this we have to decide how many springs we are going to use and how we will set the bridge over the top of the guitar. This will influence string tension, vibrato action and the sound of your strat styleinstrument.

Let's start from a Fender factory practical system for the vibrato bridge installation on a brand new Stratocaster.

First of all consider that a decent vibrato bridge is usually sold with factory pre-set saddle positions that give an approximated intonation for .009-.042 and .010-.046 strings. We need a wood piece measuring about 25x50 millimetres, with a sloping thickness from about 6 to 12 mm: in short, a wedge. If you are a willing and convinced strat-fan, you'd better get one or have it made by a craftsman. 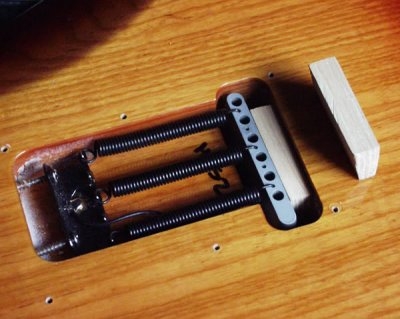 The instrument should have strings put on and a movable capo placed at the first fret if the nut has not been finished yet. The bridge screws have to be set as described above. Springs are not installed yet and the claw should be at about 25 mm from the hole body edge.


Insert the wood wedge between the sustain block and the guitar body, thus leading the wedge in a centered and orthogonal position compared to the longitudinal axis of the guitar. Tune the strings and make the wedge slide in and out until the distance between the tilted bridge base and the guitar top is about 2 mm. Tune again. Now you can adjust neck relief, then action and finally remove the capo. At Fender they remove it at this point because they still have to cut the nut, but we can take it away before relief and action setups if the guitar is already completed. We could even avoid using a capo.

At this point you can adjust the pickups as showed in the article “ The setup of yourguitar (Pt 5) - Setting single-coil pickups”.

Once all these things have been done, you can finally install the springs.

Start installing three springs, placed parallel to each other from the block holes to the corresponding claws. Gradually tighten the two spring extending screws until the wedge finally drops down. Done! 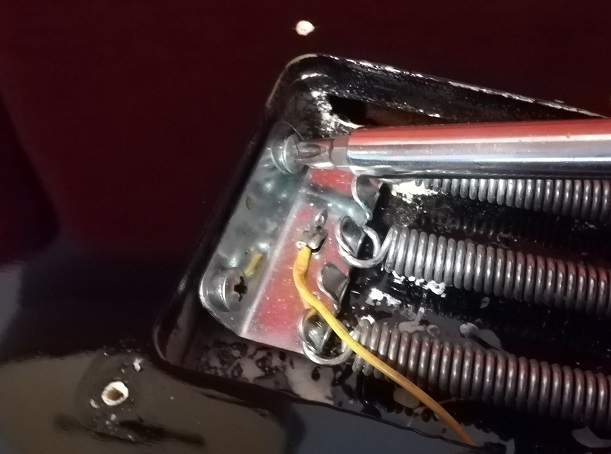 At this point you can recheck tuning, relief, action and intonation of the guitar .


Take what you need from this procedure on a case by case basis, skipping what you have already done. No need to say the wood wedge can be redundant for already assembled guitars.

The same setting way can be used for the two pivot American Standard vibrato.

Are these “rules”? Not a chance! Seventy years of Stratocaster and similar guitars accustomed us to see several settings of the distance between the vibrato plate and the guitar top, in addition to a variable number of springs , from two to five, or even just one (when the bridge is kept laying on the top and the sustain block is fastened by a wood piece, as in Eric Clapton's early style Strat).

Not “certified sightings”, but Ritchie Blackmore of Deep Purple used five springs and kept the bridge heavily slanted in order to rise as well as to lower the tuning. Jimi Hendrix and Stevie Ray Vaughan used five springs too, but they kept the bridge flush onto the guitar top, just like the early Eddie Van Halen to get his “dive bombing”. Five springs really is a high number of springs and applies a remarkable tension to strings and guitar. Personally, I remain with three springs, though somebody installs just two, angled from the outer holes of the sustain block to the centre hooks of the claw. Not only: after-market springs can have different lengths and somebody changes them based on their number. 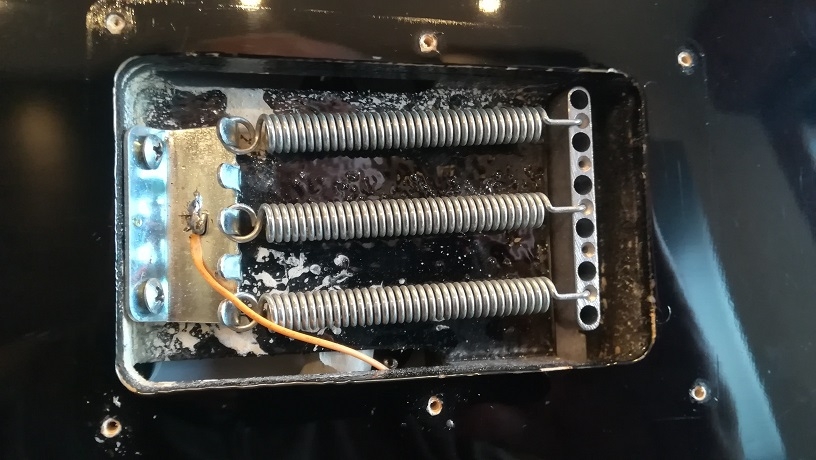 Generally, we can say that two or three standard springs are OK if we make a musical and intense use of the vibrato arm. If we use it as a colour or occasionally, three or four springs are possible. Number 3 makes sense, not by chance Fender bases its factory setup on it, using .009-.042 strings on Standard models and .010-.046 on Vintage ones.

Let's talk about bridge inclination on the guitar top. As you read before, a couple of millimetres is the factory standard at Fender, but a guitarist as Jeff Beck, who has made vibrato a fundamental feature of his style, keeps his American Standard bridge tilted up at 5 mm over the top, in order to easily use the arm both to raise and lower pitch. In particular, Beck wants to get a whole step increase of the fourth string fretted at the third fret (from F to G).

Another vibrato “obsessed” is Scott Henderson, who sets his bridge in order to get a major third increase of the third string ( G to B) when he pulls the arm up and an octave drop of the fifth string when he pushes the arm down. 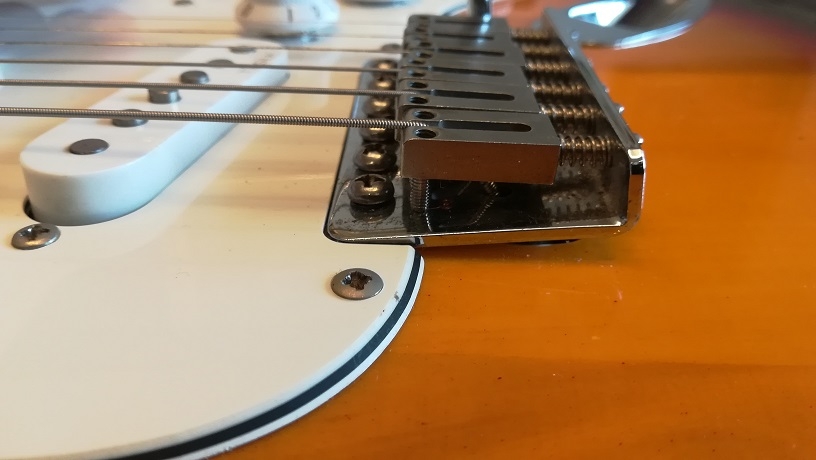 Well, if you don't want to live holding a tuner, a screw-driver and a caliper in your hands, trust the adjustment I’m suggesting, good for a general use and as a starting point for personal updates: I suggest an increase of “almost” a whole step pulling up the arm while playing a D# at the fourth fret on the second string ; if it goes a whole step up it is certainly not a problem. 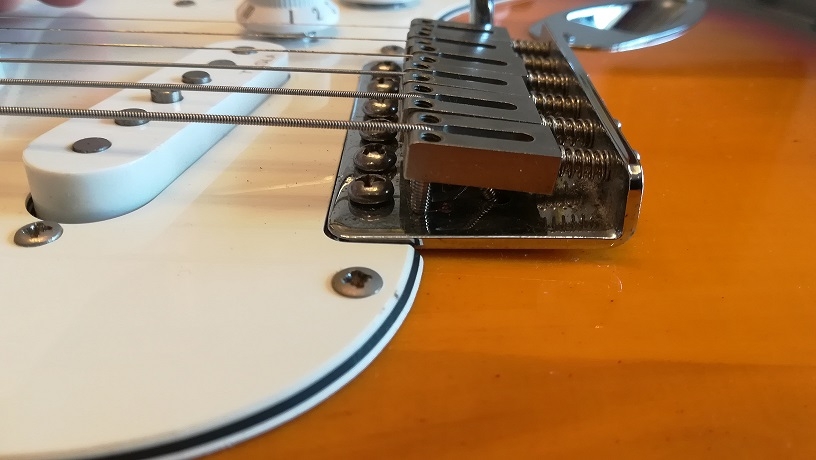 Should you have not much interest in vibrato and can't stand hearing all the strings going flat while you are bending one (remember the whole system is in a synchronized but floating balance), keep the bridge steady flat onto the guitar top. 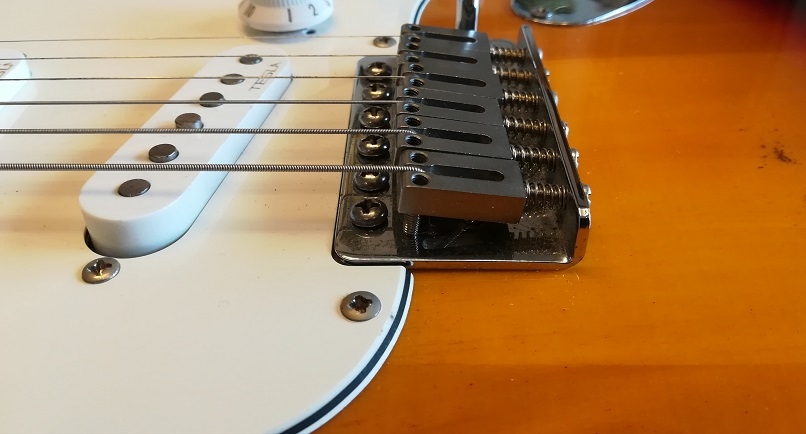 Besides choosing a good build quality model, here are some suggestions to get an optimal operation from your vibrato:

Do not renounce quality

Well, this is not all about vintage style six screw vibrato, but is already much. If you are beginning with an inexpensive instrument, do not give up quality, such as that offered by Soundsation guitars.

There is a great market of accessories and spare parts made for the Stratocaster vibrato, from different length and angle arms to so-called tremsetter devices, that optimize its function.

Be sure to experiment your solutions and search the net for reliable tutorials. This is just part of the story, as you can always read on our fabulous blog.